Drag Hunting – or – the sound of hounds in the distance

I have been horse riding for more than 20 years at a local stables and have been approached by a couple of people who I know very well to ask if I, or anybody from the Running Club, would be interested in helping them as ‘runners’ for some of their hunt meets.  This would involve having a ‘scent pouch’ on string that would be attached to a belt and then you would be given a 20 minute head start before the horses and the hounds were set loose.  The route would be pre-worked out and you would be running on some roads, grass margins and mostly edges of farmers’ fields.  There would of course be a few small jumps to negotiate and maybe a few ditches to allow the riders one or two obstacles to make it more interesting.  The routes generally range between 8 and 12 miles so it would be a couple of hours running at 10 minute mile or faster ideally.

If anybody would be interested in being the quarry (mostly on Saturday mornings starting 8-9am) please drop me a note on jon.wilding@sky.com and I can speak with the people involved to say that we have people prepared to run.  If this offends you in anyway then please ignore this post, the purpose of the drag hunt is not to hunt animals and it is the ‘whips’ job to control the hounds so that they do not chase the scent of anything else. 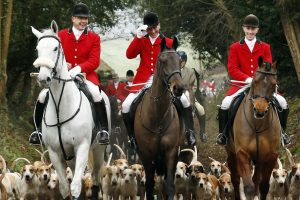 Since a ban stopped fox hunting with hounds, hunts continued with dogs chasing down a pre-laid scented trail instead of a fox.