Happy New Year to everyone! Thank you to David Seymour for the nomination. I wasn’t really sure what I was going to write about for my profile, so decided to fill it with photos. I appear to have managed to waffle on a bit as well though… sorry!

I liked most sports growing up. I always enjoyed PE at school, and loved tennis, hockey, athletics, rounders, etc. The only things I was useless at were netball, high jump, and sprinting. I would always come last in the 100 metres, finishing way behind everyone else. I still don’t like short distances now. Please NEVER say “only a parkrun to go” to me in a longer run/race – I may well punch you!!

In PE we would often run around the outside of the school grounds. I was one of the few who would try to complete as many one mile laps as I could within the hour. Unlike most of my friends who would take a short cut through the school just out of sight of the teachers, wait for 10 minutes, then come puffing and panting around the corner! Everyone thought I was weird for completing laps, but I loved the challenge.

Outside of school I spent most of my time in a swimming pool. From the age of 5-16 I was a member of Ipswich Swimming Club, training many more times a week than I run now. I would get up at 5am to train before school, then was back at the pool again at 4pm. Weekends were spent at galas.

I loved being part of an amazing team, and I have some great memories from those times.

I stopped swimming when work, studying, and partying took over, and didn’t do an awful lot of sport for a few years, other than occasional visits to the gym.

Fast forward 8 years to 2004 and I entered and completed a 5k Race for Life with a friend, which took place on Chantry Park. I absolutely loved it and was pretty much hooked from then on. The same friend lived in Felixstowe at the time and often used to see the Felixstowe Road Runners run past her house on a Tuesday evening. I decided to give it a try (sometime in 2005) and haven’t looked back. The club was very different then. Nigel Dadge was the club coach and took the session every Tuesday. There were usually only around 15-20 of us each week, and we would meet on the balcony within Brackenbury. We would also stretch here after the session – we’d be like sardines if we tried that now!

Within the first few weeks of joining FRR some lovely ladies took me under their wing – Jayne Farnworth, Elaine Brinkley, Anne Oliver and Helen Challis. They became great friends and I would join them for a long run every Saturday morning in Felixstowe.

One thing that I had always wanted to do was to run the London Marathon. I was fascinated by it. I would watch it on TV every year from when I was about 10, and clearly remember telling my parents that I would run it one day. So after joining FRR I decided to give it a go. Unsurprisingly I failed to get a ballot place, so opted for a charity place in 2006 instead. Armed with a Nigel Dadge training plan, my training started on Boxing Day…and it snowed! I was very proud of myself for completing and ticking off that first run on my plan though. The weeks went by, and helped by Jayne, Elaine, Anne and Helen, I began ticking off longer runs. I remember my first 14 miler – the girls all ran the first 10 with me, then Jayne and Farny (before he started running) came out on their bikes to support me on the last 4. It felt like the longest 4 miles, but Jayne and Richard were amazing – they had already planned a route for me and carried my water and jelly babies (my main fuel source in those days!).

The following week I completed a 16 mile run with the girls (and Roger Causon if I remember rightly), but from then on things started to go a bit wrong. On the Monday I did my usual 3 mile recovery run around the perimeter of Adastral Park on my lunch break. All was fine, but by the end of the afternoon I couldn’t stand up straight and could hardly walk. After a few days of rest and no improvement I made an appointment to see my GP (there were very few sports physios around then, certainly none that I knew of, and no Facebook to shout for help). The GP was fairly unsympathetic and sent me away with anti-inflammatories. A week went by still with no improvement, so back to the GP I went and this time I begged for help! He eventually gave me the details of a good osteopath and recommended I made an appointment. Within a few days I had seen the osteopath and she diagnosed an issue with my sacroiliac joint (yep, I’d never heard of it either!). After 3 more appointments and several hundred pounds I was finally able to run again. I had missed 6 weeks of training – including all of the 18 and 20 mile runs. Looking back, I should have deferred my marathon place, but I was so desperate to do it and had already raised over £1500 for charity. So in the remaining few weeks I built my long run back up to 16 miles and just kept my fingers crossed that I’d be able to somehow find another 10 miles on the day.

When the day came I felt very relaxed and funnily enough, well rested! The atmosphere was amazing and I loved every minute. The weather was perfect – nice and cool, although there was a massive downpour at around 20ish miles!

When the heavens opened!

The best moment was bumping into Annie Woodard at around 18 miles. I remember spotting her up ahead of me through the crowds and gradually catching up with her. It was so nice to see a familiar face as I was into the unknown by that stage having never run that far before. We ran together for a mile or so, but I encouraged Annie to press on as I was starting to struggle. I ultimately finished in one piece. Not quite in the time I originally wanted, but it gave me something to improve on for my next marathon (which 11 years on I still haven’t done!!).

The days of the “one-size-fits-Tim” t-shirt!

London will always be a favourite, despite it not going to plan. It will always be special as I had dreamt about it for so many years. Another favourite was the Brandon Forest Half Marathon in 2007. Unfortunately it no longer takes place, but it was a lovely scenic run through the forest. Small and low key, but really well organised.

I love the Turkey Trot. Had a great run there in 2016 when Magic pushed me round to a PB. We’re still friends, despite him telling me for the last two miles that the finish line was “just round the next corner”. GRRRR…

The Great Bentley Half Marathon is also a favourite, particularly in 2017, when I ran with Helen Duggan. It was completely unplanned, we just bumped into each other at the start and didn’t even discuss sticking together. However we settled into a nice pace which was perfect for both of us, and finished together. I think we both got a PB that day too!

The Wattisham Triathlon in 2015 also sticks in the memory. Not only was it something a little different, but I got the chance to complete it as a team with two great friends, Carla and Jayne. With me in the pool, Carla on the bike, and Jayne on the run, we were so close to taking the ladies team prize, but were just pipped to the post! 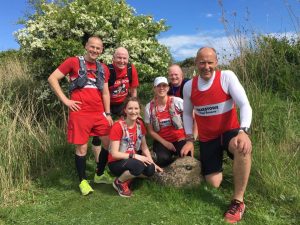 Not a race, but my absolute favourite run from the last year has to be joining Simon and Mark on the last part of their epic two day Sandlings run. It was such a great day out with great company, and to round it all off it started and finished in the pub!

I was fairly lucky when I first started running. With the exception of my marathon injury I had no issues and managed to avoid any niggles, aches and pains. I basically had around 5 comfortable years of running. I then had two 12ish month breaks from running between 2009-2012 when I was busy having children! Since restarting in 2012 I’ve had some really annoying niggles which have had no obvious cause, and have therefore taken a while to shake off. A knee issue in 2013 was particularly frustrating and saw me side-lined for much of the year. But eventually, after lots of stretching and strengthening work I managed to come back, albeit very slowly – I went back to basics, starting with 1 minute walk/1 minute run, then gradually building it up. Although extremely frustrating at the time, it really taught me to never take running for granted again. Looking back on that year is a great motivator, and helps if I am ever struggling with a loss of mojo.

I absolutely love the social side to running (and no, I don’t mean the bit where we all sit in the pub; although I love that bit too!!!). I love the simplicity of going out for a run with a group of friends, and having a good old natter. You just can’t beat it! FRR have always been such a friendly and supportive bunch, and I have made so many great friends over the years. I have nowhere near enough space to mention them all, and wouldn’t want to miss anyone out. Hopefully they know who they are!

I have slightly fallen out of love with road racing recently. I seem to put myself under far too much pressure and worry too much about time. So I’m having a break from all that and switching to the trails. I only generally run 2-3 times a week as family life is quite hectic. So I want to make sure I enjoy those runs and that they don’t feel like a chore.  My favourite runs over the past year have all been on the trails, and I’d like to explore them more in 2018. We are so lucky to have such beautiful countryside right on our doorsteps. I’m even trying to embrace the mud!

I think it’s about time we got to know some of the newer members of our club, so I’d like to nominate the lovely Collette Green for January. Over to you Collette!