The weekend was originally billed as a long 4-day weekend away in Wesel to run their half-marathon on Monday, 1 May. Then we selected our flights and realised we would have to leave Felixstowe at 5 am on Saturday morning. But at least that meant that we were settled into our hotel before lunchtime. We promptly walked down the high street to the local food market and all got a bowl of Grünkohl to warm us up. 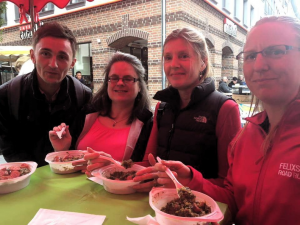 Then it was back to the hotel for the beginning of the weekend’s programme the Wesel twinning committee had put together for us. Hanne Eckhardt (Head of the Wesel-Felixstowe twinning committee) took us on a very pleasant and sunny walking tour of Wesel where we enjoyed the many decorated donkeys (Esel) Wesel’s shopkeepers have outside their shops not to mention the pedestrian parking spaces at the foot of an apartment block. The walking tour also included the Wesel cathedral, some impressive views of the new bridge spanning the Rhine, and the very picturesque Rhine itself. 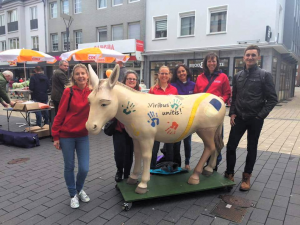 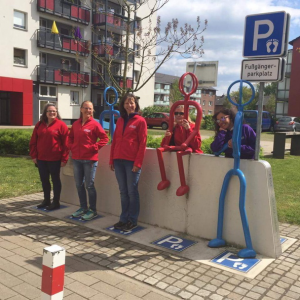 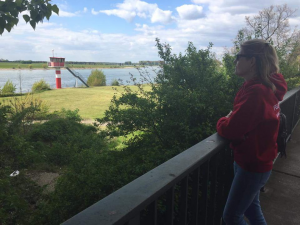 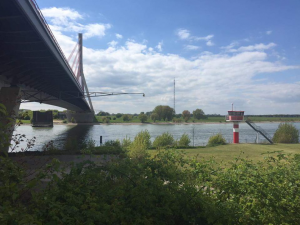 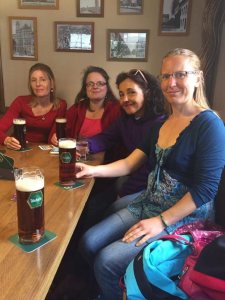 All that walking made us thirsty, so we convened in the nearest bar in true FRR fashion.

Afterwards, the twinning committee hosted us at the “Kuhstall” pub where we were invited to  come back on the following night to “dance into May”. 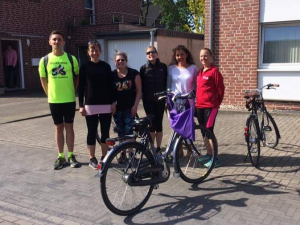 Roll on Day 2! The original idea of a pleasant cycle tour along the Rhine on Sunday morphed into Dieter taking us  out for 35 miles. Even though it sounded daunting, we felt up to the challenge! The scenery was stunning, the cakes in the restaurant at the half-way point were absolutely breathtaking, but I think we were all envying the two German ladies’ electro-bikes by the end of it all! 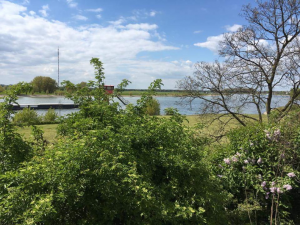 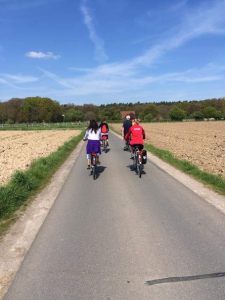 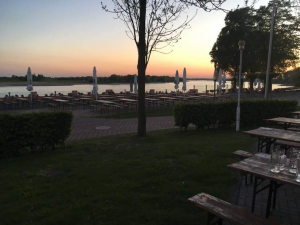 We got back to the hotel, had five minutes to shower and change before walking as fast as we could to the Kuhstall pub to dance into May (I was not going to miss out on that!)

All this was, of course, the perfect preparation for what awaited us on Day 3: the Wesel half-marathon! I myself hadn’t run more than 5 miles in 3 months, we were all slightly fatigued from our 35-mile bike ride, and there was a lot of, “Oh, I’ll just get round” talk. As ever, this turned out to only be talk. 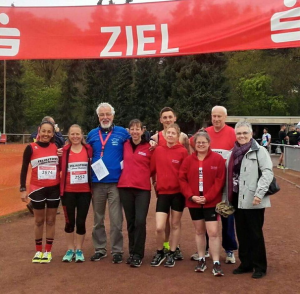 Dylan ran most of it alongside me, pushing me to maintain a 07:55 pace. He pulled away with five miles left in the race to finish in an amazing  01:39:26 (PB). After he ran ahead, I managed to stick with a couple Germans, one of whom thanked me for pushing him so hard before running away from me with only a mile left in the race. I am very pleased to report that I got him on the line in typical Erika fashion! Marion also ran a PB (01:46:13), Christina smashed it in 01:50:53, Richard in 01:57:02, Alyson in 02:26:24 and Jo (who was convinced she would run a 02:45) finished in 02:32:57!! Sally, our only entrant in the 5k, finished in 34:25. All in all, a great FRR showing. The course was flat and the weather was perfect, just enough vertical misting to keep you from overheating. The race commentator jokingly accused us of bringing the British weather with us, but you couldn’t have had better race conditions!

We were all so surprised to find no goodie bags – no banana, no medal, no t-shirt, no nothing!! – at the end of the race that even our German hosts noticed our disappointment. So each of them started rummaging around, sweet-talking the race director, etc. and started bringing us loads of goodies. Dieter bought us beer at the clubhouse bar, Hanne came to us with towels (which were only for the winners), Dieter’s wife found some treat bags, and Wolfgang even rustled up some medals for us (even though only the kids got one)! Icing on the cake, our first three finishers were awarded a framed drawing of the city gate! 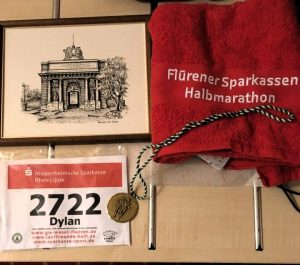 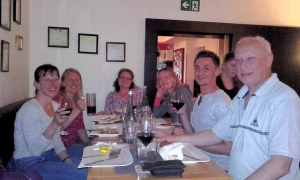 We took the rest of the day easy, had a great meal in a great pub and a wonderful evening of snacks and booze back in our hotel room. 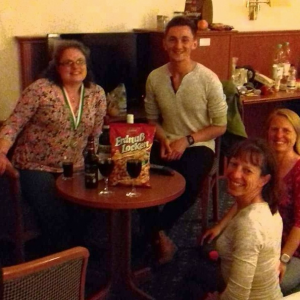 On Day 4, Dylan, Christina and I went out for a short recovery run along the Rhine (because how many times in your life do you get to say that?) before sitting down to our last full German breakfast.

We had an official twinning meeting at City Hall with the Mayor and her entourage to discuss exchanges between the two towns, mostly re: running and cycling. I’m happy to report that we represented Felixstowe well :) 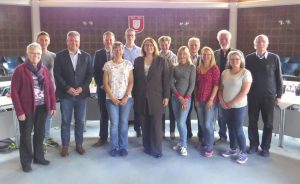 The highlight of the afternoon was something we had been planning since our first time walking down the high street: ice cream. And let me assure you, the Germans know how to do up their ice cream!!! 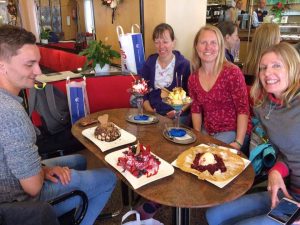 We were then whisked away to the airport by Dieter and Wolfgang and arrived safely in Felixstowe late Tuesday night. It was certainly a whirlwind trip, and one I feel very honoured to have participated in. I had loads of fun with this crazy bunch of FRR, and I’m sure we’ll return the favour when the Wesel runners come visit us in September for our Coastal 10.

Here’s a local newspaper article chronicling our participation in the Wesel Flürener half-marathon: 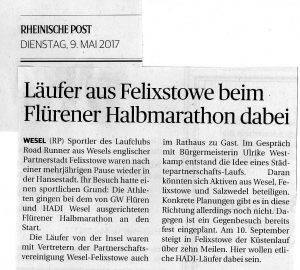 Translation…
Runners from Felixstowe in Fluerener Halfmarathon Athletes from Wesel’s English twin town Felixstowe’s running club, Road Runners, were back in town after a break of several years.

The visit had a sporting purpose: the athletes had entered the Fluerener Halfmarathon, sponsored by GW Flueren and HADI Wesel.

The Island runners were also entertained at the Town Hall by representatives of the Wesel-Felixstowe twinning Committee.

Discussions with Mayor Ulrike Westkamp gave rise to the idea of a Twin Town Run, in which participants from Wesel, Felixstowe and Salzwedel could take part.

As yet there are no firm plans for this. On the other hand, a return visit is already planned. A 10-mile Coastal Run takes place in Felixstowe on 10th September. Several HADI runners are hoping to take part.

Footnote:
HADI is the name of the running club in Wesel. (They seem to do more, cycling and walking too)