When I was a young chick, sorry I mean, child, I was very quiet, shy and not very confident, however I did enjoy taking part in sports such as netball and rounders, and was one of the faster kids racing 100 yards on school sports’ days.  My school report from 1975 said “Marion has worked quietly, but with no great energy expected of an able girl like her!”- not sure what that meant!

In my 20’s I swam several times a week, didn’t do much exercise in my 30’s and hit the gym in my 40’s – the only running I did was about 20 minutes on the running machine! When the gym put their prices up, I didn’t renew my membership. In the Spring of 2007, we had a barbecue and I got talking to two of our guests, Richard and Jayne Farnworth, about exercise, or to be more precise, my lack of it, and they suggested I come along to a Tuesday evening Felixstowe Road Runners session. Feeling very nervous, as I’d only run a couple of times round the block, they kindly picked me up and took me to my first session. Nigel Dadge was the evening’s coach and was very supportive of the middle aged newby trailing along at the back.  After a few weeks of attending, I got to know a few of the lady runners, Elaine Brinkley, Anne Oliver, Annabel Bennett and Annie Woodard, and spent my Tuesday evenings trying to keep up with them. One of my now best friends, Jo Dickinson, joined shortly after me.

At my first FRR social events, a quiz, I met Penny Ainsley, another FRR stalwart, who offered to run with me – she can take credit for showing me parts of countryside around Felixstowe that I hadn’t been aware of, even though I’d moved to Felixstowe in 1998!  I clearly remember her telling me that I was “a lazy runner”, which she delivered with a smile. This had the desired effect and made me strive to improve.

At around the same time I joined FRR, I had also started working for RTJ Trailers, owned by Jason Taylor, now known as “Gripper”.  Within the year, I was also running on Thursday evenings with Jason, Steve Durrant, Dean Searle, Jo Dickinson and Jenny Jarrett (now Lynch).  All are current FRR members. This Thursday night session continued for a while, and I still run regularly on Thursday evenings and at weekends, with Steve who, with his years of running experience, has helped me improve my speed, pace and subsequently my confidence. He’s been a great mentor.

My first race was a Race for Life at Chantry Park which I enjoyed, although I did have to go for a wee in a bush half way round!!  My first “proper” race was the Felixstowe Half in 2008, which I completed in 1.57.47.  I now had the running bug and started entering races with more confidence.

I really enjoy the Friday 5 Series, in particular, Kirton and Bury.

Another absolute favourite is Woodbridge 10K – the organisation and atmosphere is amazing and everybody is buzzing afterwards.

The Ekiden Relays are also great fun and I love the camaraderie amongst FRR in this team focused day out, not to mention the food brought along by participants – the highlight last year was the delicious scotch eggs! 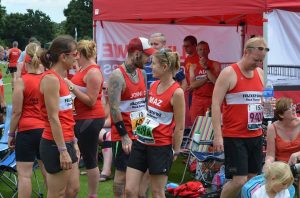 In 2014 and 2015 I did the Great North Run, both times for charities and loved the local Geordie support.

Finally, although parkrun is not, as I’m always being told, a race, I really enjoy beasting myself round Kesgrave. It’s always a race to me, even if its only with myself! 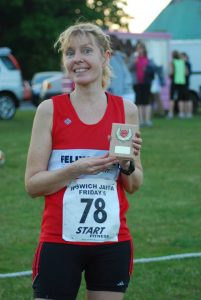 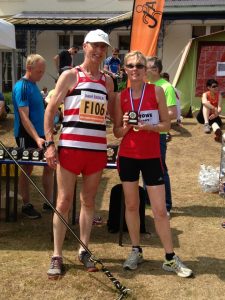 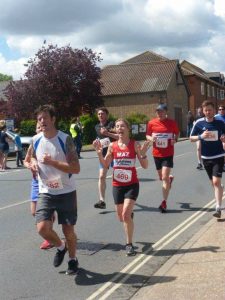 You may have guessed now, I love a bit of bling, preferring a medal to a tee-shirt any day! 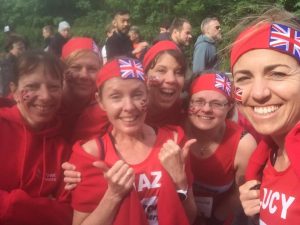 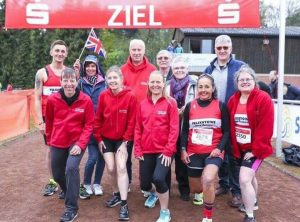 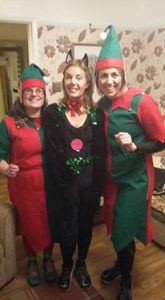 Aside from my selfish trophy hunting addiction, I have to say that the absolute best thing about FRR is the good friends I’ve made, Jo, Christina and Lucy McAlpine especially – we don’t just run, we socialise (not just talking about drinking – honest! ). It’s been great seeing how the club has evolved over the 10 years that I’ve been a member and there’s always somebody to banter with on a Tuesday evening and all the coaches, past and present, have all contributed so much to the club.

Running has made me a much more confident person and I’ve also discovered that I have a competitive streak after all – I wish my old PE teacher could see me now :-) 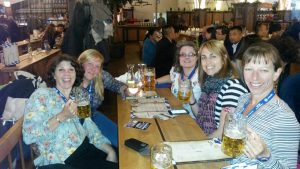 Having deliberately taken my foot off the gas last year, so to speak, I’ve decided to up my game for 2017, as it’s my last year in 50-54 age category, so here follows my wish list:

My nomination for August

I’d like to nominate, a very modest, lovely lady that has been coming to FRR for many years and I’m sure has a tale or two to tell, Anne Oliver.