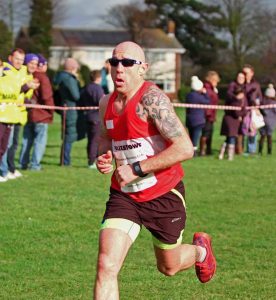 Good question. At school I hated running and would take every opportunity to get out of it. Motorcycle racing was my passion and I enjoyed many years with Lee Crisp racing around the country at a high level, that was until March the 26th 1989 when I broke my right femur, OUCH!! After 18 months and numerous operations installing and removing pins and plates, I took up Kickboxing in an attempt to keep fit. This was great and I reached Black Belt 2nd dan before moving onto ABA Boxing. The problem with this was it involved running; Get fit, fight easy.

When I stopped competing at Kickboxing and Boxing, for some strange reason I carried on with the running and joined a very friendly club called Felixstowe Road Runners. From this a passion grew to pick up my running shoes and get out there, this is when I started to enjoy the pain.

Rest up after my month of marathons, then hit the Friday Fives.

I am looking forward to the Team Challenge 24 hr Conti Thunder run in July.

Amsterdam 2013. My second Marathon, broke 3 hours with a 2:52:50, fantastic finish into the stadium and the beer was good.

I have lots of favourite moments in sport and running but seeing how the rest of my family have gone from not being at all sporty to taking up sporting activities and the enjoyment of Parkrun, pushing themselves for better times and PB’s. It’s great!!

A more recent favourite of mine would have to be The Haymaker!! How David has come to the club, trained hard, got involved and then now completed his first marathon is awesome.

Who’d you like to see do a runner profile for June 1st?

The pick for June’s Runner Profile is my consecutive weekend Marathon mate, Jimmy Russell (Where did he come from?)