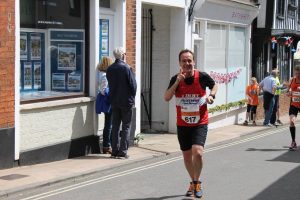 I did a few XC races in my younger days. There was a running club after school which I attended until it got in the way of football training. After leaving school in the 80’ the only running I done was running around a football pitch every week in London and later in Felixstowe .

In 2001 I sat watching the London Marathon on the TV, through inspiration I decided I would attempt to run it 2002. I trained, I did it and then again in 2003. Following that I didn’t run again for the next 10 years until I went to have my old age medical/MOT check. The report suggested somewhat strongly that I got off my backside and exercised. With that kick up the backside I got back into running, I trained and completed London in 2013.

In spring 2015 I made the decision to complete the application form and to wander down and run with FRR. My passion for running and enjoyment at being part of this club continues to grow.

Well I have 3 more marathons booked and hopefully I will get to my goal of being a sub 4 marathon runner before the year ends.

I was reading and talking with some FRR’s about their SVP 100 journey’s in 2015 so I have decided to join that madness this August. I’m also looking forward to the Friday 5’s, Thunder Run weekend, RNR, our social events and the good old Wibbly Woobly log jog. 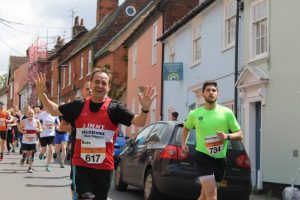 The London Marathon is always special. I grew up and spent my school days where the route runs through The Isle of Dogs. Being part of FRR at Round Norfolk Relay in 2015 was thoroughly enjoyable, I also found the Woodbridge 10K to be everything that I enjoy about running and being part of this club. But…. The Brighton Marathon in 2016 pips it. The organisation, the course. the crowd support and having my family and friends around the course to shout me home stands out the most.

Standing on the Champs-Elysees waiting for the start of the Paris marathon. I had never felt so good, so fit and healthy in my life. 4 hours and 30 mins later at the finish my worse moment followed as I crashed and burned in the heat and fell well short of my dream goal.

Also..following FRR athletes on their marathon journey’s this year. Through the training, whether it was their first, a sub 3 or 6 hour or one of those many PB’s. It has been superb and at times emotional following.