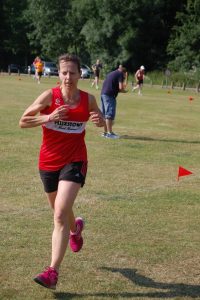 I started running in January 1987 to coincide with my New Years Resolution to quit smoking and I joined FRR that spring. Over the years I’ve been an active member within the club (more elusive of late). I was Ladies Captain, organised the Felixstowe Half for 3 years and took every Tuesday session assisted by SallyAnn for at least 2 years, taking over from George Buxton until Nigel became the Official Club Coach.

I’ve enjoyed many years of racing and have really enjoyed travelling here and abroad for various races including Wesel, Graz, Berlin, Fussen, Hamburg, Cuxhaven and Dublin (bit of a German theme going on).

Looking back I wish I had been able to appreciate that I was a reasonably good runner in the day but FRR has had so many amazing fast ladies over the years I was most definitely considered very average.
Over the years I’ve really enjoyed assisting others to get into and enjoy their running, it gives me as much joy supporting as it does actually running.

In almost 30 years of running my longest break has been 3 weeks post appendix operation in my 20’s but once hitting my 40’s I start becoming considerably more creaky!!

This time 3 years ago I was so ready to give up but decided on a different form of attack and began MAF training (by HR) running slower and eating a healthier diet, no sugar or grains, hoping a big reduction in inflammation and pace would be the answer. Seemed good as I ran the Stort 30 a few months later (fuelling only on water/coconut water) and all was good again. I have suffered with my back more recently but with A LOT of hard work I seem to be back on track…..yay!

The Cuxhaven Half Marathon (aged 44) it’s where I spent much of my childhood, my family both from England and Germany supported me, I flew round (for me) in 1:37:19 and came 4th lady. I could so easily have been 3rd but she looked like a man, a dirty trick! It was ridiculously easy and I had to floor it in the last 2 miles as I had so much left in the tank….damn it!

Breaking 4 hours in the Dublin marathon, 3:44hrs, I said 10 years earlier I’d never do another and I’ve not felt I needed to prove anything more to myself since.

To get back to Tuesday sessions now my back is much better. Run the Flower of Suffolk in September after missing it last year and to run an Ultra in Cuxhaven in July 2017, hoping for the 60km on mud flats, road and marshland trails, worst case there’s a 33km :o)