I’ve run Woodbridge 10k three times already. So when Robin popped this on the list I was elated and relieved; not that there was ever any doubt. This is a favorite event for FRR, and this year was no different. With over sixty FRR signed up, this was going to be a blistering race.

Using the same pre-race strategy as before, I chugged beetroot juice and piled on the pasta-carbs the night before. The start gun wasn’t to fire until midday, so plenty of morning lounge time. A hearty bowl of muesli was a very welcome change to the normal pre-race rituals. At this stage I still hadn’t made my mind up on the topic of footwear. I’d had some good experiences in the New Balance shoes, but I’ve been wearing in the Vibram Fivefingers KSO‘s over the last month of so of parkruns, and I’ve genuinely been amazed at the comfort and tactile grip these weapons give the rider. They wouldn’t be to everyones taste, but I’m quite smitten.

Then I peered outside; rain. It never rains on Woodbridge 10k race day. Seriously, there’s a deal going on somewhere where this never happens. The weather report said this was just a glitch, and sure enough as today’s bus driver arrived (Peter Woods) the tarmac had already begun to dry up. Peter is off form for this distance right now, and with a somewhat rude 5am awakening wasn’t expecting gold plated glory, but was looking forward to a solid assault on the course. A PB was off the cards for him (apparently) but he wasn’t going to be pulling any punches out there.

I snapped on the KSO’s and darted out the door. As we drove through Ipswich I realised in my excitement and general flippancy I’d forgotten my water, sun cream, money and… pain killers. Ha! We’d just have to pray the Woodbridge gods would shine kindly on me today! 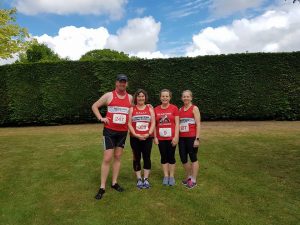 We rocked up at about 11am, and quickly met up with other FRR’s who were pinning their bibs on, on the pavilion. The less I mention about Simon Hedge’s bib placement, the better I think.

At 11:20 I knew it was time to start stretching out the upper abdomen, so took off for the grass track. Sprint/Walks were the order of the day. A few peak bursts of speed with some fairly bizarre stretches. After about 1 mile I’d got about as much done as I thought I could without eating into race energy reserves, so headed back to base. 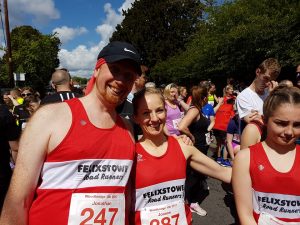 Collected my thoughts again, and headed to the start area. I selected the 55min pen, along with Jo and Courtney. This was Courtney’s first Woodbridge 10k outing, so she was keen to hit her dad’s inaugural time of 56mins (?). The overall negative elevation delta between the start and finish can lull runners into the false impression that this is an easy course. It’s not. I’ve found with most races, you have to respect the distance and the elevation in equal measure. If you abuse the downhills, you’ll likely pay back heavily on the uphills.Courtney darted off as soon as we’d passed over the blue mats. As we came to the first hairpin turn we were pitching 7:20min/mile which was way too fast, knowing Drybridge Hill was coming. I managed to claw Courtney back to a more sensible 8min/mile pace, but then as we hit to foot of the hill I needed to back off a bit while she utterly nailed it, with Jo then following in her blazed trail soon after. (Nice effort Courtney)

The Jenkyn Engine was feeling strong, even at the Wildcat marshal point I was cruising at 8:30. The throngs of supporters really make this event. They are the adrenal pumps pushing us round. Love it! And I’m sure it takes whole minutes off finish times. FRR do really well in this respect. Just a short distance now till I’ll be heading towards lap 2… and then it happened… again. Chest pain. I was turning right up towards the cruise through the town centre and the pain became so severe I had to walk. I was demoralised. Why is this happening now? I was about 3 miles in and had had no symptoms before now, and suddenly I was pacing slower than normal walking pace. I tried a couple of times to restart the engine, but it was having none of it. 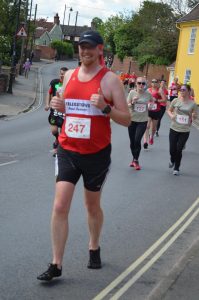 I was run/walking all the way through to the top of Drybridge hill for the second time, by which time I knew all whispered thoughts of bettering last year’s PB 53:55 time were dust. “Take some time to compose yourself JJ.”, I thought “You can still have a good run. Let’s see if we can drag this in under 1 hour.”

I came into the Wildcat marshal point hot, and knew there were some sweeping hills and (most importantly) those throngs of supporters out there. I knew Solly and Ben were out there on the sidelines and wanted to show them some effort. I pushed my pace back towards the 8’s and 7’s, and took it easier on the uphills. Pushed through the town centre, and slogged my way up the final hill to the finish. I wasn’t happy with my time (GPS showing 1:01:14, but I had started it at the gun not the mat. Official time 1:00:43), but I know I delivered a strong effort on this difficult course. Inside the finishers pen were an exhausted looking Jo and Courtney. Courtney too had had a difficult race, narrowly missing her target. A strong effort though from the youngster. This is not 10k on a track, or on home turf; this is a technical course that you need to respect and blowing up is almost a required ritual for the course on your inaugural outing, and with the sun now bearing down us it really was a baptism by fire for many. 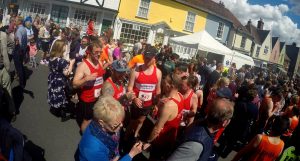 A stroll down to the Anchor to debrief with other FRR athletes and supporters alike was also good therapy. Knowing that I’d gone out somewhat under prepared and cock-sure, I’m already strategising my return to this fabulous running throng! It’s really great to see so many new faces out there in Red too, by the way. I thought I knew most FRR’s but with our club now extending well over the 200 member threshold, I realise now that this simply isn’t possible. Just great to see the club grow and come together at events like this!

I caught a lift home with Ali and Justin who kindly diverted my drop off to central Ipswich due to me having forgotten my house keys too (did I mention I was in a bit of a brain-fritz today?), and having to hook up with Sacha and my kids who were there getting Ice Cream… of course!

Next time I’ll need to write a checklist, to make sure I don’t forget anything. More lessons learnt! The KSO’s held out really well, and I was very pleased how they coped on this 100% tarmac course. No pains or niggles to report. Just got to get the abdominal stretching optimised and pain controlled. Other than hanging up my shoes for 6months, I simply don’t know what more I can do.