This race needs very little introduction! Many of us have watched it on the TV and thought
“I’d Love to do that race one day!”

I entered London last year via a charity place, this was to be my first marathon attempt, after all if you’re going to try and run any marathon in your life it really has got to be London! I finished last year’s race in 4:42 and I left London feeling proud that I had completed it but hooked on the idea of giving it another go. I only applied to one charity this time around, and as I wanted a personal connection. I chose the MS Society as my grandmother has suffered with this debilitating disease for many years. One morning in August I got a phone call from the MS society to say that they had accepted me to run the London marathon 2017 for their charity, I felt ecstatic and nervous at the prospect!
So the training plan was set for January, hotel was booked for the 21st April and St Georges day was going to be a bit different this year!

I had my last appointment with JR on the 21st April just prior to heading to the Expo and a last minute chat about my race plan. Over the winter, I had set myself a new marathon PB of 4:29 at Valencia and at London I was desperate for 4:15 finish time.

During the winter and some long training runs I had learnt the hard way about heading out too fast then crashing and burning after 18 miles and I didn’t want this to happen here. So I decided that I needed to be half way at 2:05 giving me an extra 5 in the bank for a drop in pace for the second half.
The morning of the race arrived, I got to the red start and started to look for the fellow FRR’s in the group. Unfortunately the phone networks jammed up and I couldn’t get hold of anyone or find them in the masses. 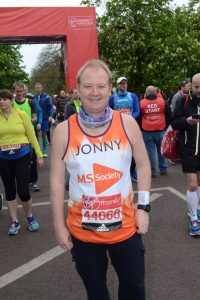 I got to start pen 6 and had a quick look around – phew, no Rhinos in here with me this year, last year I’m pretty sure Mo Farrah was in one the speed he went past!

The gun goes off and I crossed the line dead on 10:15. Knowing the FRR supporters where at mile 12ish and what my plan was; I decided to break the race into 6 mile segments and this worked out well for me, despite a brief hug off my daughter at the FRR cheer point I passed the half way mark at 2:05. For once a plan was coming together leaving me feeling that my target was within reach. I carried on around the docklands although congestion was slowing me down and I knew that at mile 21 – the dreaded wall could possibly hit!
This time around “the wall” didn’t hit me as bad but I had slowed up a little and by mile 22 my banked time was used up and 4:15 was slipping away. It was at this point the 4:15 pacer over took me. I knew that as I had passed the start before him, to just follow him wasn’t an option but if I could stay with him for a few miles then give it all I had I was still in for a chance of my target finish time. At mile 24 I heard a loud noise and it was the FRR’s in their new location, cow bells and all!! My wife took photos of me at this point and I was running whilst pointing at the 4:15 pacer by my side, determined to overtake him…..however my wife thought I was showboating with the infamous “DAB”. I looked at my watch thinking it’s now or never and I over took the 4:15 pacer and picked up speed, determination sweeping over me and the support from friends, family and FRR spurring me on I managed to hold my pace to 25 miles, then came 26 miles and I still felt strong, I saw Buckingham palace and knew I was almost there but unsure if I would reach my set target! 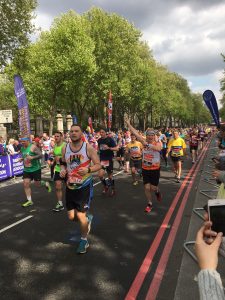 I crossed over the finish line and immediately paused my watch…… I had only bloody done it! Official time added 40 seconds making chip time 4:15:40 – but also with a recorded distance of 26.4 miles I’ll take that! I reached my target finish time and was proud of what I had achieved. 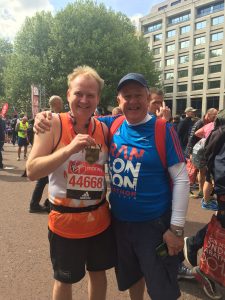 Next stop was the Chandos pub for a well-deserved pint.

For the first time ever I had executed what I had set out to do, I could have got carried away at the beginning and paid for it later, but I planned what I needed to do and I stuck with it. Looking back at the statistics I can see that on the first 35k I passed 8678 runners and 393 runners passed me! In the final 7.2k I passed 1601 runners and only 22 passed me!

London is one hell of a race, it’s a shame the entry system can’t be improved but it’s also a major fundraiser for charity’s world-wide so I can see arguments from both sides.
It joins the running community from the world’s elite & good for age, to the 8 hours’ group and even the ones that the sweeper bus has passed and they still carried on just for the personal achievement of doing what they had set out to do. On my way back to the hotel I passed people at 7:30pm still taking those painful & heavy steps along the embankment to reach their finish line despite it no longer being there.
London is an experience that I hope any one who has dreamed about it gets the chance to do it. Hopefully they don’t spot during this year’s ballot that there is a Jonny Miles living at every house on my road – but you have to be in it to win it! 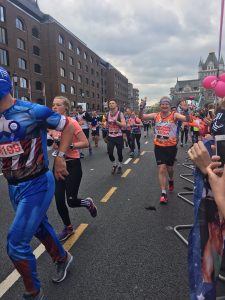 London – I will be back one day.