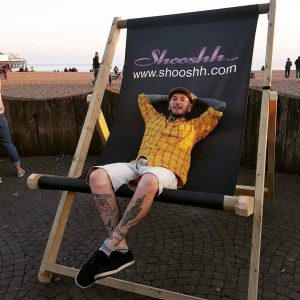 So, Brighton Marathon 09/04/2017. This was to be my second Marathon attempt, and indeed my second go at the Brighton course (creature of habit?!). I thought i’d try and give a rundown of how the race went. Its my usual longwinded approach, so if you don’t have much time, i’d probably leave now! Anyway ……

The morning came, and i was awake about an hour before my alarm was set. This is the norm for me on race day, bloody race nerves! We were staying at The Grand Hotel, which has one of the best breakfast buffets i’ve ever seen, and for the second year running(we stayed there last year too)  my wife made the most of it, whereas due to the combination of race nerves and gingerbreadmanophobia, i had a single solitary plain crossaint and a glass of apple juice…. exactly the same as last year (creature of habit?).

We intended to leave the hotel at 8-8:15, its a 30 minute walk from the hotel to the start, and i wanted plenty time to get to the front of the red corral to find the sub 3:15 bus. But me being me, ended up faffing about and we didnt leave till 8:30. We marched as quick as we could to Preston park whilst i nibbled jelly babies and sipped lucozade to top the carbs up. The other half was getting very worried about lack of sun cream, and against my wishes found someone who was applying some and asked if she could use a bit for me. I huffed and puffed but in the long run she was right, i would have absolutely frazzled in that heat, especially with a completely black arm!

With 10 mins till official race start, a run up the hill to the nearest bush for a jimmy riddle, and kiss goodbye to the wife, and off i went to fight my way to the front to find the 3:15 pacer. I think in hindsight it was kind of rude to nudge to the front like that, but the way i saw it, was if you were trying to get to a certain pacer, you’re within your rights to do so? Either way, i found the 3:15 pacer with about 3 minutes to spare. The TV camera was rolling and the presenter was doing the usual waffle about what an achievement a marathon is. I was stood right behind so i shouted “Go Felixstowe Road Runners” at the top of my voice, and jumped up and down like a lunatic to try and get the club a little airtime. Only time will tell if this strategy worked!

Now the race was about to start, but before i go on, i need to clarify. I had seeked out the 3:15 bus as this was my best case scenario target. I had been quite vocal about this, and written all about it in my runner profile a couple of weeks earlier, so had put quite a lot of pressure on myself to try and hit this target. However, i was NOT confident at all i was capable of this. A conversation with John Reynolds 2 nights earlier had put me in the frame of mind that i was going to go for it regardless, and if i crashed and burned i’d have known i’d have given it my all (unlike the year before where i played it safe and didnt come away feeling i’d given 100%). With that in mind the start horn beeped and off we went!

It was already pretty bloody hot by now. But as we were within the town centre, there was plenty shade to find. Still, you knew as soon as you were out in the open, it was going to be quite testing! Hydration was to be the key to unlocking a decent time today. We left the park and turned left up the horrible big hill, i remembered this shocking me last year, but i knew it was coming this time, so it was fine. I was fairly sure there were no other notable hills anyway, so get this out of the way and its plain sailing.

The last quarter-ish mile nearly killed me. I really wanted to sprint over the line as i did last year, and the adrenaline kicked in as if to give the body permission, but the legs had other ideas. I tried and tried to pick it up, but the more i tried, the more i hurt. As i approached the finish i could see 3:19:XX up ahead. WHAT THE HELL!? I thought i had bags of time in the bank. I could not let plan B go, not this close! F**K it! Ignoring the pain in the legs i went for it. I’ve never felt pain like this running before.But the pace just didnt come. 3:19:56, 57, 58, 59, 3:20:00 …. Bollocks! It was too late. I limped over the line at 3:20:11, gutted! Plan B was so close, how could this happen? My watch says i did it in 3:17:25!?
I was frozen in pain for a few seconds over the finish line, but was ushered out of the way for the long torturous walk through medal collection, goody bag collection, water, protein bar, foil blanket, recovery shake and  kit bag collection. This walk is horrendous! Especially if (like me) you don’t actually have a kit bag to collect! Brighton Organisers, if you can read this…. please set up an early exit line for folk like me!?

I finally got to the designated meeting point to see my wife, and told her i’d missed both plan A and plan B, but she looked at me and said “what are you talking about, your chip time was 3:18:11” ….. Holy S**T! I forgot there was a discrepenacy between Gun and Chip time! Plan B was a success! I was elated! I could not believe i’d managed it to be honest, both with the heat, and with the hamstring/cramp issue (which i believe was a product of the heat). A near 13 minute PB from last years time, and this time absoutely nothing left in the tank whatsoever. I can honestly and wholeheartedly say i did not have a single ounce of energy/effort left inside, and this was a good feeling. I’m still unsure as to how there was a 2 minute differential between Gun and Chip time when i was 3 rows back from the start line, but i’m not gonna argue! 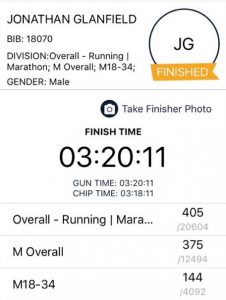 I’ll never know if on a different day sub 3:15 was possible. If i’m honest, i don’t really care. You can only battle with yourself, the course, and the conditions on the day. Its not worth thinking about other scenarios. I will say its given me confidence for the next one though thats for sure! I’m chuffed to be that one step closer to my ultimate goal of a sub 3hr marathon, on what i’ve realised is actually a fairly tough course and in undoubtably tough conditions. Brighton 2017, it was a pleasure ….. I may well see you again next year!