Last year I spectated, and took some video footage of the Bungay Festival of Running. And while I thoroughly enjoyed spectating at such an amazing event, I was chomping to get an opportunity to bite into some of the miles out there in north Suffolk countryside. Robin (as was possibly predictable) picked an event here for me. Having only a fortnight ago completed the Stowmarket Half, I was content with just busting a 10K.

My feet still recovering from the bruising they got at the Stowmarket Half, I was keen to make sure I was not going to suffer either with foot pain or chest pain this time around. I bought some new shoes which I’d tried out at parkrun and Tuesday Training. They seemed good. Low profile, I bought a half size smaller that I normally go for to assure there was no slipping/rubbing. It was a gamble that paid off, and having run several 5 milers leading up to this weekend, I was confident that this was fixed. The chest pain was going to be a little trickier.

I snagged another lift with Ben Jacobs (doing the full marathon), Alex Jacobs (doing the half marathon) and a work colleague of Ben’s (who was also doing the half). Discussions ensued on the way up in regard to strategy, expectations and goals. Ben had some aggressive goals, but much of the rest of the car were happy with “just finish” or “finish under 2h00”. 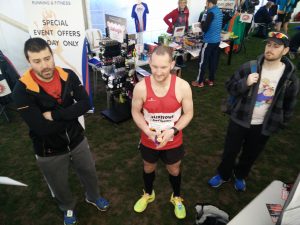 Just before the marathon set off at 9am, I spoke with Peter Woods on the topic of my chest pain (which he was now all too familiar with (Sorry Peter!)). I was contemplating a warm up, but have historically just warmed up during the race, not wanting to diddle myself out of precious energy for the event itself. Times have changed though. This chest pain is excruciating, and actually I tend to have plenty of energy in reserve at the end of 10K’s these days… so… once the Marathon set off, I headed out in the opposite direction to try and belt out this chest pain. After the first 0.7 mile I was having to run/walk already. Gah, this was frustrating. I composed myself and turned around, and did some sprint/pauses. During the pauses I really tried to open up and flex my upper abdomen to get it prepared for the next sprint. Quite painful, and even on my decent back to the startline, I was struggling with the pain.

By the time I was trotting into the start line, runners were already jockeying for position for the 10k gun. One guy near me said “Yeah, I reckon I’ll aim for a 55min finish time”. “Right, I’m going to keep you in my sights!” I thought. Angela Soames and Trish Sudell straddled me at the start, and as the horn blew, I tore away. (I think there’s an art to positioning yourself at a race startline. I keep tripping over people who appear to be going flat-out in front of me. I’ve yet to master sizing the race up, and getting to the outside to overtake quickly. “Seconds maketh a PB”!)

I wasn’t expecting the first hill into the village to feel so steep, but my legs felt quite tired already. Maybe I’d overdone the sprint efforts during my warm up? Anyway, it slowly felt like I was gliding along the course, keeping the pressure on throughout. I kept 55min-man in sight and even managed to pass him. I was finding some of the uphills a bit of a struggle, and just pulled back on the pressure a bit when my legs complained… but 3 miles in I was getting no obvious chest pain. From accounts of the previous year I knew that now there were basically no further hills and I could cruise into the finish putting power into the downhills. I used a similar scalping technique from Stowmarket to target and draw in runners ahead of me, and even along the bridleway took 6 places to my favour. I was however taken over by 3 of the marathon runners who were storming through… did they know there was another lap.

55min-man was obviously showing off on the startline, as he was nowhere to be seen, and I was now within 1mile of the finish, with 48mins on the clock. My 10K PB is 53m55, so that was out of the question; I didn’t have 6min/miles in my legs at this stage, but I did have a little more to give.

As I spied the left-turn into the finish, I could see some Reds (including Trish who had to pull out at 2Km due to a nosebleed) cheering me on. I really had very little left, but what I did I pushed into my feet as I moved from tarmac to grass. I didn’t look at the time as I crossed, in fact I even failed to stop my Garmin punctually… very unlike me. I was elated  though to have finished with no pain or health concern. I knew for sure I was sub-1hour, and probably something in the 58min region, which I’m happy with, making this my 2nd fastest 10K race to date… happy days. 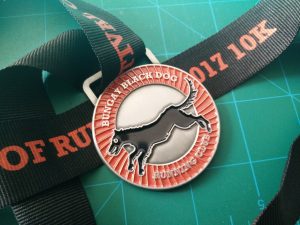 The weather was getting quite hot now, and after a brief celebration with Robin and Joanne, I headed to Shower Club. I’ll be back next year for sure. Certainly I’ll extend to the half marathon, but will I go that extra hog and stamp my career with a full marathon distance? Who knows?!

Some really amazing performances today from FRR, and along with that a few disappointments I’m sure. But that’s what we do best; we get up and go again! Ave te ipsum!