In 2016 I marshalled the Twilight races; sat out in the far reaches of tumbleweed country (aka the football stadium tunnel). To be fair I had a great time. They’d failed to get the music pumping out, so I decided to have a party of my own! Great fun! … I digress… 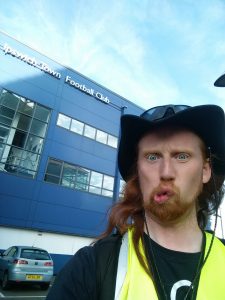 I signed up for the 2017 Twilight 10k on my way home from the afore mentioned marshalling activity, and I’ve had my eye on this race ever since Robin added it to the list. I rather like the 10k distance these days, and the thought of blistering round the closed, supporter lined streets of Ipswich… twice, really gets the right juices flowing. Anyway, leading up to the race last week I’d really lost my mojo. I decided early on to head out to a FRR Tuesday training (Liz Beighton’s session) to make sure the legs, arms and torso still had “it”. Well… they didn’t. I did a 1 mile warm up with major chest pain, then as I started out of Brakenbury for the training-proper, I ran into a clearing marked bollard. (To be fair, it was there first.) I then hobbled to the session location, only to ultimately sit it out. :( Things were not looking good.

My 10k PB was set in 2016 at the Woodbridge 10k finishing in 53:55. I distinctly remember the elation I felt. The surge of adrenaline as I crossed the line knowing I’d delivered well. I was kicking myself that I really hadn’t done the required training or preparation, and after a false start on Tuesday, my hopes of even breaking 55 mins were dim and distant. I whispered to myself that I’d be happy with anything under an hour. That’s the goal. Sub 1:00:00.

I arrived alone on foot. No baggage required. Just my vest, shorts and shoes. I picked the New Balance shoes for this race, as it’s all tarmac. I love the fivefingers, but they’re not really suited to 100% tarmac racing IMHO.

As I arrived, the sunny face of vice-captain Dave “Solly” Solomon was there to greet me. He was dressed like he was going out to the pub. “You not racing today Solly?” I queried. “Nope. I ran 100km last weekend, and I’ve got some distance to do tomorrow. I’m here for the enjoyment of it”. And boy was he not alone. There were hundreds of people out there simply supporting this race. Amazing throngs of people jostling and lapping up the festival atmosphere. Soon, as always appears to happen, the Reds coalesced. 73 FRR team members participated in the 10k; And 2 mad-men (Jason “Gripper” Taylor and Darren “Dazza” Cook) competing in the 5k… as well! Such awesome support from our team.

The 5k was delayed a little due to cars still out on the route. A hard decision by the organisers, but the right one.

There was a similar, but shorter, delay for the 10k. I positioned myself optimistically in the 50min finish bracket. Soon other FRR’s were joining me. Esther, Rob “The Coalman” Kemp and Justin Ostler were all high on bants as we waited for the foghorn to blow. Esther was out of the gate like a woman possessed. I was trying to ride out my warm-up pain by going a little slower, but desperately wanted to hold on to the coattails of Esther. I bolted towards Portman Road, and had the opportunity to pass some kudos to Ben Jacobs, Jon “Wobble” Glanfield, Robin Harper and Jess Farthing.

I was crusing. All was good. No foot pain. No chest pain. I was comfortable. As I was coming up to the Drum and Monkey though, my chest tightened up. It was “old familiar”. Damn. Double Damn. I was 1.5 miles in, and I was now walking. Many Reds then passed me. As they did, they’d ask if I was ok (still the right thing to do for anyone walking so early on in the race). I’d confirm that all systems were operating within normal parameters, and that I’d be biting back my position in the race as soon as I had the pain under control.

Once I passed Arlingtons was back on pace. I doubled down my effort to scalp some of that lost time back. I really wanted to catch back up with Esther if I could, or at the very least Rob. 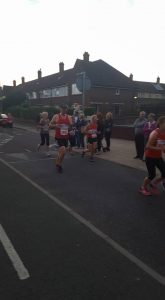 Such awesome support from the FRR crew on the pavements. Goodwin was there, as too were Solly and innumerable others. As I came in to the 5k marker though, while I’d clawed back some distance, I was well off pace to catch anything but a cold. I needed to double down, and push on the downhills. Just past the marker, was Naomi (Rob’s wife). “How far ahead is he?” I enquired. “A minute, maybe a bit more”, she replied. “He must be flying.”, I muttered under forced breath as I turned on to Rope Walk for the second time that evening.

I genuinely have a bit of a blank up until the Arlingtons again… I could see the outline of Justin Ostler turning right at the top, along the back of M&S. I pushed on. As I turned back down on towards Westgate Street, I could see not only Justin, but the shadowy figure of Rob “Coalman” Kemp. They were spurring each other on; little did they know that they were both dragging me along too.

As we came to the end of Tavern Street, they were within striking distance. I was channeling FRR’s very own ninja runner, Solly, at this point; silent running. If they knew I was so close, they’d surely put a sprint on… they’ve form for it. On the corner of the Buttermarket, I could see “Coalman”‘s mum stood supporting and cheering on the pair in front of me. Her eyes connected with mine. I raised my right index finger to my closed lips as I ran on… she looked confused… “GO JJ!”, she bellowed. “Cripes… did they hear that?”, I thought. Well now is as good a time as any. I made a break away and cruised past the pair.

Boom! I was really pushing now. My heart alarm had stayed quiet throughout the race, and I was warey of it going off if I pushed too hard too early. I hadn’t looked at my watch at all throughout the race. I didn’t want to know. Sub-hour.. how hard could it be? 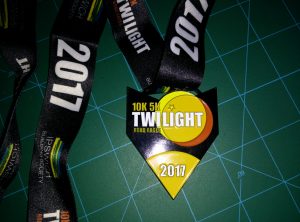 A quick de-brief with Justin, and then a plod back up the course in the direction of home. It was getting dark… and cold… maybe I should have brought a jacket? :)

Look, this is an amazing race. The organisation is textbook. The race is very well supported by the local populous. It’s a great way to spend a Friday evening on the town. Congratulations to all who organised, attended and participated. I really didn’t put the training in though, and for that I kick myself. I’ve got the Coastal 10 next, so will need to put a little bit of distance work in before then… let’s get to work!

I’m already signed up for the Twilight 10k 2018 event… you should too!