2 of 12: Stowmarket Half Marathon

So, those who read the blog regularly will remember that Sacha (my wife) has allowed me to run 12 races this year, but has the ability to veto any race, at her leisure, and without giving reason, up to a maximum of 6. My first was Gt Bentley, which saw Sacha using her veto powers off the block… For very good reasons, though. My second race this year (as determined by a list drawn up by our Captain Robin) was the Stowmarket Half Marathon.

I snagged a ride to the start line with Ben Jacobs, who was also taxiing Robin. Suffice to say the shop-talk was at a level I simply can’t contend at.

I tried jarring Ben with an “I’ll have a cuppa ready for when you eventually come in”, but the obvious gaff was not lost on this athlete who has just had the most phenomenal performances over the last 12 months.

I bought some Inov-8 road shoes at the beginning of the year, and they’ve been a right pain. First, they were too loose, then too tight. Then the insole rucked up, so I took them out. I got mega-blisters from the lack of insole last week, so I bought some new ones, which I tried out on a short 2miler on Saturday, and they seemed ok… so that’s the configuration I was going to use.

The event is actually staged well outside Stowmarket, making the naming somewhat deceptive, at a John Deere farm machinery showroom. After some shoulder tapping and witty repartee, we were heading to a somewhat makeshift startline. 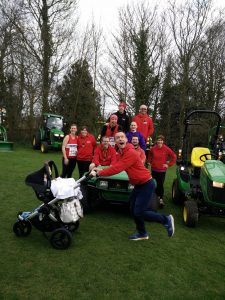 The wind was already brutal, even before we acquired GPS lock! We were like horses, ready to bolt. From the back of the pack, it was difficult to see what was happening, but from my view point I could see the faster runners already dashing off from the start line while us in the slower pack were still jostling for starting positions. Anyway, we were off!

My first mile was a shocker. Back to the old routine of chest pain. Stop-start. Walk-Jog. It was not pleasant. Knowing it’s not cardiac related, does not ease the pain, which was excruciating. After a few minutes I was right at the back of the pack, having had every FRR pass me (obviously with the now customary “Are you ok?”… which is still fine to do BTW… one day one of us might not be!). I drove through the beastly headwind, uphill and through the pain during the second mile, and began to find some steady pace in the third. But just leading up to the fourth mile my right foot started to go numb. I changed the shape on my foot fall to try to get the blood moving around but really struggled to find the correct stride. Leading into mile 5 the numbness had turned to pain; I decided I’d run to mile 7 and then run in my socks, as it was far too painful.

By mile 7 I was still in pain but was using some pain management techniques to alieve it. I pressed on as I was now scalping back all the back runners that had overtaken me at the start. I wanted a sub-2h20, and knew with a fair wind I was perfectly capable, but I didn’t have a fair wind, and the pain was definitely not on my side. I cruised passed the 2h30 pacer flag, and could see the 2h15 flag off in the distance. I carried on pushing into down-hills and up-hills while continuing to battle the gusty head and side-wind. We were now turning to head back to the finish line. The pain was really building up; it felt like a red-hot poker under the bridge of my foot. I’d tried loosening the laces, which has worked with similar symptoms before, but not today.

I looked at my watch as I passed the 10mile marker. 1h45. With just a parkrun to go, if I stayed on target with my pace I’d have a shot at my 2h20 goal. I was really beginning to flag at this point. My left hip, after compensating for my change in gait was now also giving me jip. No time to stop and take the shoes of to see if that would help… just press on through the pain and get this done. I scalped a few more people who had (in their own words) hit the buffers, and could see Robin stood at the left-hand turn into the finish line with blue cut off jeans. “PB is on JJ! PB is on!”, Robin shouted pointing right at me. I lengthened my stride as I turned the corner colliding with an unobservant spectator who tried to cross the racing line without looking first! I bolted for the line… 2h17. BOOM!

I collected my medal, flapjack, water and banana, safe in the knowledge that I’d given it everything I had. I could barely walk though. The shoes came off and I gave my right-foot a good extension and massage. I won’t put it through that sort of a pounding again!

All in all a really fast course. I’d love to do it when the weather is a little more favourable, and with the proper equipment. Lesson learned. 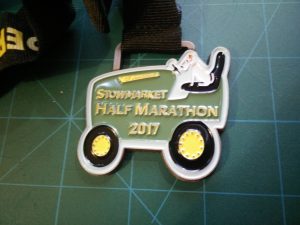 Well done to all the FRRs out there today, and also to Stowmarket Striders for putting on a fantastic race which I’m sure will become increasingly successful.

FRR won a few Silver awards and Ben Jacobs walked away with a Bronze! Congratulations are in order. I think I fell asleep in the back of the car on the way home…

Next race is the Bungay 10k.