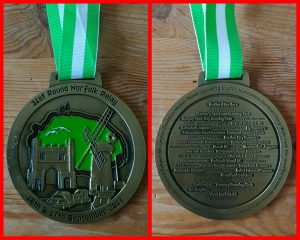 For the uninitiated, the weekend of 16/17th September saw 17 of our runners take the “Red” to Norfolk and compete in the annual Round Norfolk Relay where 60 odd teams of 17 runners run a relay race for 198 miles around the periphery of the county, the legs vary in distance between 29” and 33” and that’s just the runners’, who run stages between 5 and 19 miles, all ability guys and gals from our club compete in the “Club” event. The event is staged so that all the teams should finish in a 45-minute window on the Sunday morning and to facilitate this there are staged starts throughout the morning on the Saturday – this year we started at 6am, with a predicted finish at 10:22 am on Sunday

At the time of writing this it has literally just been confirmed we have finished, around 25 mins ahead of schedule – I am at home alone and am quite overwhelmed (note to self – wipe the tears Richard you have a report to type !!) – and so, composed, I now get back to the story!

My partner and I set of for Kings Lynn at 4am arriving in good time to meet Steve and Sam Brookes who got there a few minutes ahead of us, whilst it was still clearly very very early there was quite a bit of activity with the 5.30am starters moreorless ready to roll.

I made my way up to Registration and to the first shock of the day, as I went into the room the race RD attracted my attention and very quickly proceeded to make a presentation to me, once I had adjusted my gaping jaw in a fog of wonderment (well it was still only 5.30am) I was presented with an award to the club for having done ten RNR’s – we achieved this milestone last year but I do not think we knew there would be a physical award as such, and to think, last year we very nearly did not enter it! 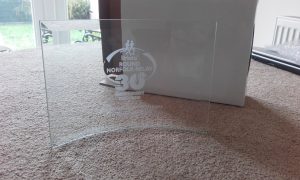 Trophy for 10× Round Norfolk Relay appearances, achieved on the 30th running of the event.

Whilst I have not been involved that long my guess is a large slice of the praise for such an effort must go to Tim Finegan – though clearly (despite being a finely tuned athlete) he did not do it alone!  Then further the RD presented me with a RNR 10 yr. milestone medal for Fred Boggis, well done Fred it really could not happen to nicer guy, that, was a very good start to the RNR “day”!

And so, at the crack of 6am Steve and I set of with two other runners – well actually Steve went off like a train keeping pace with a Fram Flyer with me struggling to keep up on the bike. The weather was kind and though it was cool and a bit breezy in places it was generally very good running weather, and for most of the daylight hours that weather prevailed, there were however a few exceptions as I am sure Jo Whelan will attest to! (while several of us sat in cars at Cromer looking at the down pour whilst Jo got soaked through cycling back there to support Jonny – sorry Jo!)

There are just heaps and heaps of little stories that come out of 28 hours of this mayhem and I was only there for around for half of it, the event is just bizarre and in the Caps’ words, “life affirming” in so many ways and these few words in a report will never do it justice or manage to impart the “buzz” – not even the much loved Jimmy Russell can match the levels of lunacy on display throughout the day – the fatigue, the pent up tension, the emotion and the camaraderie it would be so difficult to replicate, if you’re not in a hurry though I would suggest you just ask any of runners about their own experiences and feelings on the event – be prepared though they might just go on a bit !

As with most running clubs the majority of the races we do seem so intensely to be oneself against the world, to beat that runner or another, to better one’s time etc but RNR more than any other race is an opportunity for the team to take on others. There is so much interdependence on one another, not only to put in a good shift on the road, but to be at the right place at the right time and to ferry others about, the scope for error is enormous and I can see the concern written across people’s face’s and the perceived pressure that imposes but I believe from that comes the togetherness and the spirit to perform for the team, for each other, we are blessed in FRR we have that spirit and RNR only but enhances it.

Sadly, there are though a few apologies to be made, to Sally who was not able to run, to Sam for me being on the drag for bike support and to Matt for me not turning up at all – well in fairness I went to the wrong place which was very embarrassing, especially at the time as the then leader of the RNR (Matt) was held up waiting for his cycle support (but thank you Gt Yarmouth Runners for helping !!)  I am so glad it was not Robin Harper that I had left standing around whilst leading a race!!, Matt was such a gent about it!!

In turn, each of the changeover points came and went until it was time to hand over to others’ to be my hand on the tiller and for that I would like to thank Adrian, Ben, Roger and Rachel who helped out on the admin side in relation of timing/admin which is such an important part of the event. I must also mention Tim F for his help and Sally Solomon for her support and Courtney for her Country File esq wildlife shots and embracing the Harpers’ carer role with such zeal.

Rightly though I must reserve my greatest praise for the runners themselves so I say to Steve, Sam, Jo, Matt, Chris, Jonny, Mark, Liz, Dan, Robin, Ali, Ben, Roger, Rachel, Peter, Adrian and lastly but no means least Solly – take a virtual step forward and receive your applause guys – well done to each and every one of you, to a “man” you did what it said on the tin – you were never more than 20mins from the schedule and the travel logistics in your mutual hands seemed to have worked well. I admit I nagged you a bit but making sure you knew your route was for me vindicated today in reading the RNR Facebook page and the feedback of those getting lost and considering such comments particularly in relation of Stage 2 and the “golf course” our very own Sam Brooke must have done brilliantly to get round so quickly – well done.

The formal results will be on the Round Norfolk website

As for next year, if we enter I will lead it again but I would like an assistant who the following year (if applicable) would hopefully take it on, as next year, if we enter will be my third and final year in charge, so if you’re an amateur statistician, psychologist, diplomat (I am rubbish at that!), performance analysist, can read a map and have organisational skills and fancy a crack then step forward, but not now! (only when it is decided or not if we are entering a team)