First of all I’d like to thank Farny for introducing me to this drinking club with a running problem, If I said it had been life changing – it would not be an understatement.

I was not very active as a child or when growing up. I remember running a lap of the Orwell sports field but I think this was punishment for getting caught smoking behind the sports hall. Fast forward to June 2013 when during a routine medical the nurse put the fear of god into me about my filthy habit. I’d tried and failed many times over the years to stop smoking but having a 2 year old daughter at home made me ultra-determined this time. On July 16th I put my last ever fag out. Whilst I felt better having stopped smoking and was saving quite a bit of money, the down side was that my wallet wasn’t fattening up anywhere near as fast as my beer belly!

October 2013 during a drunken night out with my brother we ended up signing up to Tough Mudder, considering I hadn’t done any exercise in a long time I had now set myself a challenge. I spoke to Farny a few days later and explained what I’d just signed up to and he just said to “run a mile, and once you can do it comfortably add a another one on”. So on January 1st 2014 that’s exactly what I started to do. After about a month of my small loops, I started to run with my Best mate Rob who at the time had decided to do the Stowmarket half. Unfortunately after a while I couldn’t add the miles as quick as he could so I was back to running by myself – but watching him complete Stowmarket I felt the bar had been set. I completed tough mudder and decided that I didn’t like mud, water and being electrocuted that much so I would return to the tarmac. 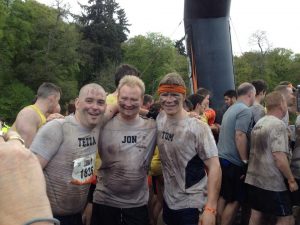 I made my first visit to a parkrun with Richard the following weekend, afterwards when i got home i entered the Perkins half marathon, filled in my FRR form and I was off. I went on that year to complete the Coastal 10, Perkins Half and the Bungay Half (old, ‘great east run’ course) I only attended a few Tuesday night sessions at the time as I didn’t feel that confident as a runner, but I think I had well and truly caught the running bug.

During 2015 my sister in law had been fortunate enough to get a ballot place at London, I remember thinking to my self – Could I do that? And after I saw her cross the line on the BBC iPlayer I decided that I was going to have a crack! I contacted a charity called Together for Short Lives who said I could have one of their charity places for 2016.

2015 turned into a year of half marathons to get me ready for the spring marathon training. Some of the highlights that year were The Great North Run – an amazing experience, my wife Cathy also completing the Peterborough half, Meeting the Schwer’s at Haverhill and being invited into my first ever FRR photo; The wet race that was the Hadleigh 10; I ran most of it with the Haymaker (David Mayes) and from that day we have spent many an hour running around Felixstowe and beyond.

Spring 2016 and marathon training was in full flow with lots of races, lots of tape from John Reynolds holding me together and, as Haymaker also had a London place, I had somebody to train with. Having never gone over 13.1 miles Tarpley 20 was put into my schedule. I set off and soon ended up in a group that consisted of myself, Jo Whelan & Will Schwer – we all pushed each other around the course and when I crossed that line I remember thinking “I might just be able to do this!”

London Marathon day arrived and what a day that was! Farny wasn’t wrong when he said it’s the greatest race in the world! I crossed the line in 4:42:47 and I was on cloud 9 and I received a text from Haymaker to tell me he had beaten me by just over a minute!

In just over 2 years I had gone from not being able to get to the end of the road to completing a marathon! I’m not sure if it was the post race high but when I got home I went and entered Bournemouth Marathon in October. I was probably intending to just keep up my mileage after London but I lost a bit of drive and I didn’t go out for weeks.

One day in July a message from Carla Wiggins popped up in my facebook news feed asking if any one fancied a run of about 6 miles. I replied that I was up for it and suggested the Felixstowe half route. Looking back it must have seemed a bit dodgy meeting a complete stranger at Brackenbury car park to go running with… but it was the start of another friendship and halfway round Carla announced that she was training for Lisbon marathon that was the same day as Bournemouth……. now if I could keep up with Carla’s distances then perhaps Bournemouth wasn’t off the cards just yet! I spent the summer months training with Carla, another Great North Run, completed a few more parkruns, except from these ones we ran back to Felixstowe afterwards to get the mileage in. I finished Bournemouth in 4:49:51, Not happy with my time I decided to enter Valencia. Autumn was very busy, Bournemouth Marathon, Round Norfolk Relay and during one training run with Jo Whelan she asked if I was ever going to run a marathon with her? – I looked at the diary and thought, its a month before Valencia, I’m sure I could squeeze Chelmsford in. So I booked it as a surprise and a few days before, I asked Jo for a lift! The gun went off and I will never forget the 4:51:58 going round that course with Jo and Liz “I Hate Hills” Beighton!

The 26.2 mile long street party that is Valencia was a few weeks later, I finally got myself a new marathon PB of 4:29:07 – an unbelievable race to be in, if you ever get the chance to do it, take it! 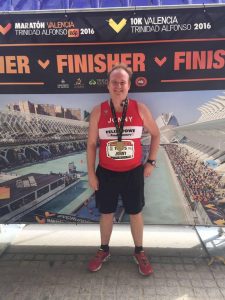 Then in early December Carla asked what I was doing on the 28th – assuming it was beer related I said “nothing, why?” and by the end of the conversation I was entering the triple tipple marathon with Carla, Simon and Mark. Its the only race I’ve known where we all stopped at a petrol station on the course to get a coffee to warm up! Carla went through the 1000 mile barrier on route and the 3 shots of whiskey and rum at the last checkpoint were an added bonus.

So i started 2016 with the intention of completing 1 marathon. I finished 2016 having completed 5 marathons and a total of 325 race miles for the year – I also made front page on le-jog so not a bad year at all.

2017 has continued the trend and been an amazing year, thanks to London this year my marathon PB now stands at 4:15:40. I have gone sub 2hr on a half marathon on 2 occasions now including recently at The Great North Run. When I first completed that race back in 2015 it took me 2:15 compared to this year 1:56 and I can only put this measurable improvement down to the coaches at FRR, John Reynolds and his pointy elbows as well as all of the friends I have made here and ran with. 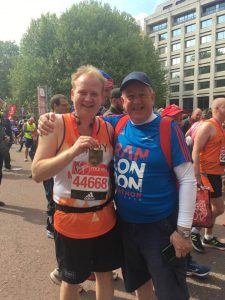 Targets for the near future

2017 isn’t over yet – Great East Run (at time of writing), Perkins half, an aim to complete the last 50 miles of the Sandlings path with the Wiggins’ and the mass FRR-on-tour Dublin marathon trip (somehow I don’t think the after-party is going to be sensible!!!). After that I will be making a return to Valencia, this time with Carla & Simon, for the marathon and Farny is flying over to run the 10K. Unfortunately due to a break from running after London due to work/family commitments, I don’t think I’m going to break the 1000 miles for my HTMW tombstone, but I am well on target for more miles than ever before so I’ll take that.

Next year i have decided not to take any charity places for London marathon, so I have set my sights on Manchester if unsuccessful in the Ballots.

Thanks to everyone at FRR for their guidance and support over the last few years, I wouldn’t have achieved what I have without it. 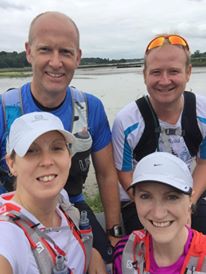 Now to pick a victim for November, I’d like to nominate a man that we are all glad to see has got his trainers back on after his injury Mr “Slow” Paul Schwer.