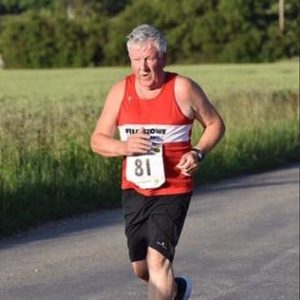 How I Started Running.

Really it was down to my wife, Jayne.

I always remember going to the FRR annual summer BBQ as a guest, sitting there as a non-runner and listening to all the running stories thinking, “I could never do this with my back problems”. Inevitably somebody suggested I have a go, saying, “Why don’t you just try running around the block?”. I still didn’t want to try but I continued to support Jayne and the Felixstowe Road Runners.

One December night, Jayne was going for a meal with FRR and, apparently, there was going to be a draw for London Marathon places. I said I wanted to join her, and to our surprise Jayne’s name came out of the hat – she would be running in the London Marathon! We couldn’t believe it.

The whole family went to London to support Jayne – it was an incredible day, the atmosphere and excitement was enough for me and I was hooked. I wanted a piece of this magic, so on my return home I went out to “run around the block” and ended up doing my first mile at times I had to walk, but persevered day by day. One mile became two, two became four and each time I kept pushing to go further and further. I said I wouldn’t join the club until I could run 5 miles, and slowly and surely I got closer.

In 2006 at the grand old age of fifty two, I finally joined FRR and started training to do the Felixstowe Half Marathon. I couldn’t believe how quickly the race day came around, and it was preceded by a really nasty cold, but I was determined not to let it beat me. I ran a very slow half marathon in 2hrs 25min, but I did it feeling on top of the world: my running career had finally got off the starting blocks! 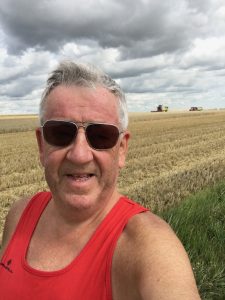 The following weekend, Jayne was running the Amsterdam Marathon and I was going along to support her and another local couple who the husband was taking part. Unfortunately, the husband had to pull out due to injury and, buoyed by my small victory in Felixstowe, I suggested to Jayne that I could run the half marathon.

On the eve of the race, we met up with other runners from FRR who were running the half marathon and naturally the conversation soon turned to the subject of ‘times’. Maybe it was the atmosphere, or maybe it was the fine hospitality, but I unwisely suggested that I could knock 15 mins off my Felixstowe time, which would mean running nearly two minutes per mile faster. Amazingly, I did just that – 2hrs 10min! I was elated, and finishing in the Olympic stadium is something I will never forget.

That same year I also became chairman of this great club, taking over halfway through the year from Nigel Dadge, which put me in charge of the London Marathon draw. I had entered the draw for the London Marathon previously but had been rejected (we all know how that feels!), but this time I was applying for club place. Four of us in the draw, but we only had three places – I was gutted to say the least my name the only one not to come out, but thought to myself, “Oh well, charity place it is!”. To run the London Marathon is a feeling that is hard to explain to someone who hasn’t experienced it. I loved the music to the start on BBC. Fantastic support from the start to the finish, an electric atmosphere, being surrounded by athletes all striving for the same goal, and the incredible sense of achievement as you cross the finish line. But even with all of that buzz and adrenaline, I didn’t think I would get through – my back pain was severe – however, with my family all cheering me on I knew I couldn’t let them down, and I pushed through to finish in 5hrs 25min. 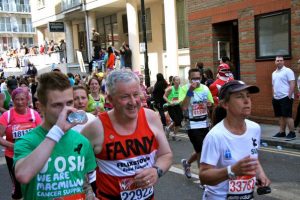 I went back to run London two more times – all with back pain, and all in very hot conditions (you can never rely on the British weather!), and in 2013 I got my best time of 5hrs 2mins.   That was when I drew a line under running marathons; it was a great experience, but for me, the training was always the best part. 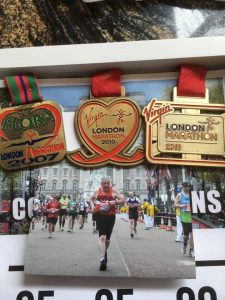 During this time, I became race director of Kirton 5, and had 9 years in the seat – sorry Vince Calver, but they were all dry ones! I had some great support over the years, too many names to mention here. There has always been some great people who have inspired me, especially in my early days at FRR.  Sadly, some are no longer with us, and to lose fellow runners is without doubt my saddest memory as Chairman. 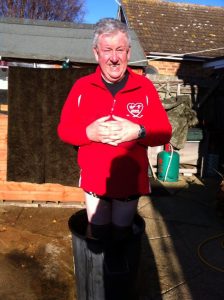 Two years ago, my running ground to a halt at about the same time as Jayne stopped running as a result of an injury. This has since been diagnosed as spinal sinoses and Jayne has recently undergone surgery to try and put her right. I hope that with some recuperation that she might yet be able to go out running again.
Jayne was, and still is, the inspiration for my running. Her grit and determination is something to behold! I wish I could have just a pinch of it – to see her run a marathon 4hrs 15min was awe inspiring.

I was chatting to a young man at work about running, Jonny Miles, and he said how his wife Cathy would like to run the Great Bentley Half Marathon. I told him I could help her to train for that, and so off we went.  Cathy and I both ran the Great Bentley Half Marathon and I knew that it was the start of my comeback.
It has been a little bit hit-and-miss, not regular Tuesday nights like the old days, but without Jayne to inspire me I guess it’s to be expected. 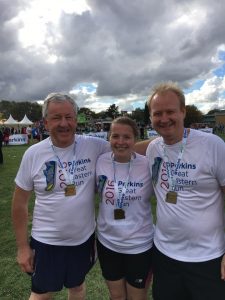 Recently my niece, Sophie Chapman, has taken a very keen interest in running and wants to do 30 races before her 30th birthday. She came to me saying, “Come on Uncle Richard, we can do the Friday 5s, the Farmington 10K and the Coastal 10m!”. I thought to myself, “She’s going to kill me off!”. 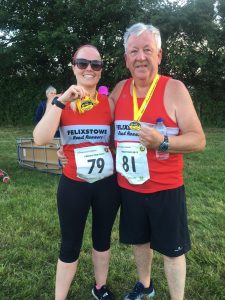 I’ve never been able to complete the Friday 5s, but this year (with the exception of Kirton) I did it…. The first race was very hot and I came last, but I still did it, and with each race I got quicker and quicker – not bad for an old git! 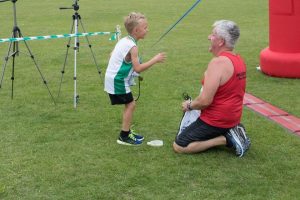 Newly inspired to keep running and stay fit and healthy, I’ve never felt better. I made a new friend in John Reynolds and he set me up with a running plan and some core exercises, I’ve lost weight and gained energy and I am relishing the challenges of the upcoming Coastal 10m before going to Valencia for another 10K race.

As I’ve said before, this great club is only as good as its members, and both in the past and today we have so many friendly people who inspire each other to perform.   I have made so many good friends and it’s all down to running. I wish all of our runners the best for the future; and for myself, as I look at how far I’ve come since I took that first ‘run around the block’, I can’t wait for the day I have the woman who inspired me to take my first stride, Jayne, running alongside me again, no mater how far we go.

My nomination for October is another inspiration to me: a man who’s name is a constant reminder of targets, times and distance, my good friend and colleague Jonny Miles. 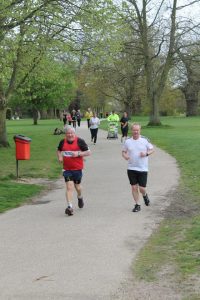