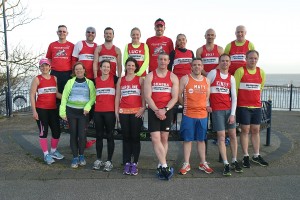 This Sunday will see several FRR runners hitting the streets in London at the 35th London Marathon.

Caroline Stafford, Matt Howe, Nicola Stevenson and Steve Smith will be running their first marathons. They are all raising money for charity – Caroline and Matt have raised over £3000 for Meningitis Now, Nicola is running for St Helena Hospice and Steve for Breakthrough for Cancer.

Rachel Crisp, Dan Gould and Darren Cook will be running their second marathon in three weeks, after having a fantastic time at Brighton. Rachel is running for The Royal Marsden Cancer Charity and got her doctors approval to delay her own cancer treatment in order to run both these events.

Jason Taylor and Roger Stone are competing with Darren to be the first FRR to finish, they have all been training hard so don’t blink or you could miss them!

If there are any other FRRs running then sorry for missing you – maybe make yourself know in the comments so we can support you.

Best of luck to everyone – though as Robin would say, it’s not down to luck!