4 of 12: Thorpeness Heritage Half Marathon

So I’m now a third into the selection Robin has made for me. This is the last long run on the schedule (if you don’t count the Coastal10), and right up to the start gun firing I was on the fence if I was going to go for the half, or defer for the Fun Run (10k).

The day previous I’d done everything to stack the card in my favour: I’d taken a easy pace at parkrun, I’d eaten my body weight in cous-cous and pasta, and had washed it all down with two pints of beetroot juice and a pint of milk. By the time 8pm started rocking round, my eyelids were heavy from the carb-crash, and so headed bedwards for an early night.

6am, like clockwork, I was awake. Felt quite good actually. Checked FB for a bit, and then headed to get my gear on. “Oh but not too quick Jonathan”, I thought “Remember all that cous-cous and pasta you ate? That’s got to make an appearance.” Well it wasn’t happening. I had some muesli to try and start the train moving, but nothing. Gah. Fine! Dressed up, I headed to the door to catch my now regular lift to races… the Ben Bus.

Ben was tackling the Marathon distance (the mad fool!), and had made an adjustment to his footwear to accommodate. “All that shingle and sand will only end up clogging up the On Cloud footwear, so I’ve reverted to these ‘normals'”. I don’t think he was looking to smear the course, but he certainly enjoyed listening to my train metaphors.

A few sips of water, and we arrived in Thorpness. It wasn’t too cold, but boy the wind was whipping up. Thorpness is the type of affair where on-the-day sign-up is quite normal, and so there were two tents; one for the pre-registered band, and another for the on-the-day rabble. Both were at risk of taking off for a holiday in the Netherlands. A couple of FRR group shots and race banter ensued.

I’d been pre-registered by Peter (because I don’t own a chequebook, and certainly don’t have a stamp in the house) for the half-marathon, with the idea that if I needed/wanted to I could defer for the shorter distance. I knew this was not going to be a PB course, but with my disastrous performance at Stowmarket in March, I was keen to perform this distance ‘properly’ before we close it out for the year. A few days earlier, I had kind of made up my mind to defer back to 10k, but the wind was blowing in the right direction today, and I was feeling pretty good. Would the train hold back though? There are marshal points and pubs out there if that causes issues.

My strategy was to start gentle with no warm up (so I would manage the warm up of my chest during the event) and then stay slow, and perhaps even walk depending on the terrain. If I felt unwell at any point, there were plenty of marshals out, I had my phone on me, and I could always retrace the route back or defer down to the 10k distance before the course rerouted. No one would care. So that’s that. 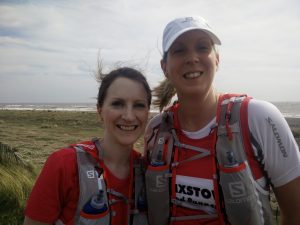 Sarah and Carla stop for a well deserved selfie

Sacha had agreed to the race on the basis of it being a 10k (confirmed at the end of the week), and this unauthorised change to the 13miler would certainly rock the boat, but (I thought) if I play it safe, listen to my body and take it very easy, I’m positive it’ll be good. After all, with this plan I may end up doing the 10k anyway! It’s flexible. Today is to enjoy running. 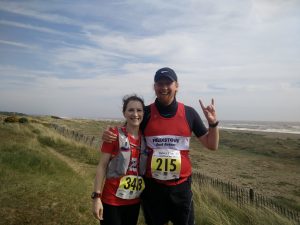 Chest pain for the first 2 miles: Standard. Then I tucked into a rhythm, but slowly backed off the pace. Not because I was finding it difficult… but because it was glorious out there! Absolutely stunning scenery. Makes you grateful to be alive. I stopped quite a few times to take pictures. For the first 5miles I was concentrating on the scenery more than I was the run. But I was having fun. Struck up a few conversations with other runners… one nicknaming me “bimbler” (Trademark Ali Ostler) (I had words with them on this infringement, but they were flippant). At the end of the beach section, there’s a steep uphill. I wanted to maintain my pace (heck knows why), and so scalped a few runners leading out. I pulled back on pace quite drastically from here. I was now committed to the half marathon, and wanted to enjoy the run rather than smear it (Trademark Robin Harper). 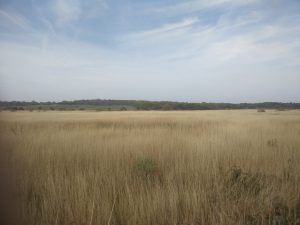 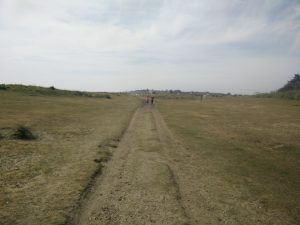 The shoe choice was also holding out. I’ve been running in some Vibram Five-Fingers recently, but with the trail-like terrain, I decided to go back to the New Balance shoes I’d bought after the Stowmarket incident!

The last 3 miles were savage in terms of terrain. The ankles were on fire. And the last half mile on that sand? Who thought that was a good idea. I romped in at about 2:36. Happy with that, given the about of faffing and stopping for photos I did. i still don’t like sand and shingle though!

This is not a PB course. It’s incredibly well signposted and marshalled though (credit to the organisers) and the scenery is breathtaking. I can see myself driving out with Sacha in the not too distant future for some lovely walks through this route. Good choice Robin. Just what the soul needed. Stunning! 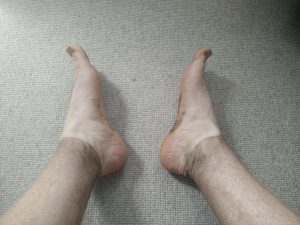 Boy there was a lot of dust and sand out there! 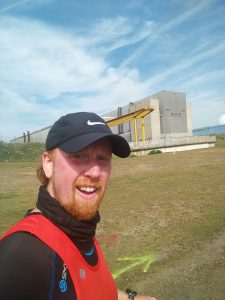 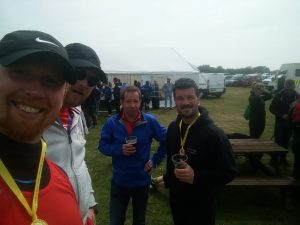 At the finish with a few buddies

Special note goes out to Rachel Wilding who was particularly nervous about her chosen distance (10k), as I think the longest she’s run before today is just over 5 miles. Suffice to say, she crushed it. Well done!!

Oh and too Courtney Turner doled out a half marathon today too. Awesome work Courtney! 2h14?