My training has taken a real hit of late. This has been a combination of my commute getting me in to Ipswich too late to get over to Felixstowe, my diet not settled with my new job yet, and generally being quite tired from my longer days. I have managed to get to a few GoodGym sessions with some other FRRs recently, but they have not really been training per se. I’ve struggled. This said, I was (as all runners who know that “last mile” feeling will recognize) really hankering for this one race for a while. And now I can smell the end, I want to go off with a bit of flare! (If I can!)

Saturday is parkrun day. As of the Saturday just gone, I’m now up to 196, so every run counts. A very steady run is what I was after. Something around the 30 mark would be fine. No heroics. I paired up with Robert “Coalman” Kemp (my choice, not his!) and trotted round for the first mile or so. A little bit of light, well tempered, bullying to get The Coalman round was required, as he was flagging a bit by mile 2. We swept into JD’s meadow, and I uttered “We run up this hill. I don’t care how slow, but we run. No walking.” Rob persisted and gave a gallant performance up towards the pavilion, but as we veered left at the top after the cheers of supporters and volunteers, he began to retch and gag. To be fair, Rob has form for this, but it’s been a while. A few “You’re a cruel man JJ!” blurts from those we had previously overtaken, spurred us on for a very commendable 32:38. Basically on target. Happy days. A chill out with the family after a walk into town, and I was set for the race.

Pre-race diet was pretty poor actually. For lunch some pasta, but then a family pack of cheesy cocktail bites for tea… not proud of myself. I woke up quite early this morning, so treated myself to 3 boiled eggs, which did the trick. 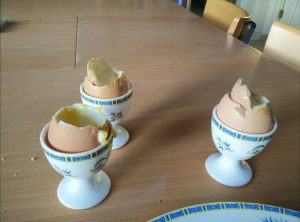 I’d lined up a ride from the FRR Captain Robin Harper at 9:15am. I decided to cyclomn’t out to his place, so left my house at 8:55am. I arrived in plenty of time. Parked my stead in the Harper nook, and got ready with the banter. The entire Team Harper were racing today. It was great to see them all resplendent in their race vests. We were now just waiting for Ben Jacobs (another Harper-Taxi customer today). Time was ticking. 9:22am. “We need to be going soon.”, said Robin as he broke out his phone to reach out to Ben and see if he’d slept in, fallen off his bike or was just running tardy. No answer. We headed out to the car in preparation for departure, and as I took my rightful place in shotgun, I heard Courtney say “I think I can see him at the top of the road. He’s on a bike wearing a red top.”. Phew! We had a full house/car, and were now on our way to Saxmundham.

The Saxon 5 is the type of race that is talked about in fairly hush tones. It’s a true TPC by every definition. From the setup to the bling. This is a really quaint race set out in the depths of East Suffolk, it’s a real jewel in the regions crown. 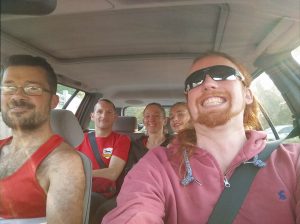 “So what are you thinking for today Robin?”, I asked as we motored North.

“I’d like to go hard, but I’m quite tired after the last week or so. I’ll be looking to deliver my best today, but I won’t be too upset if it’s not as good as my previous outings.”

“What about you Jo? Courtney?”

“Oh, we’re just out for a bit of a jog. No real goals. Just enjoy ourselves.”, Jo replied, though Courtney seemed tight lipped and egging for a harder race.

“I’d like to be challenging a Sub-30, but unsure if I can pull it out today. The weather is very favorable, but I don’t know. We’ll see.”, he replied.

“What about you JJ? What are your plans? What’s your PB over 5 miles?”, Robin asked.

“Well,” I said as I scrambled for my phone to check, “my 5 Mile PB was Kirton this year, so that would be 48:00 on the nail. If I get sub 50 I’ll be happy, but given I haven’t really put in any training, I won’t be surprised by something in the 50min bracket.”

We pulled up and parked in the field with several other FRR athletes (It’s as if we’re synchronised!), and so discussed the course with Jo Whelan, Eli, Peter, Sarah Finch and Rod MacGregor (FRR newbie).

I had hoped that the cyclomn’t to Harper’s would have sorted out my chest issues today, but a short pre-race jog soon made me realise that this was no longer the case. In fact running on the grass was quite fatiguing, so I really didn’t think I’d have enough stamina to do a mile and a half of prannying about and still be able to do a 5mile race justice. I sufficed with some moonbat-like faffing in an attempt to stretch out my abdomen, and then trotted to toe the startline.

In true TPC fashion, while there are bibs, there is no chip timing. A spray-painted line in the grass marked the start of the race, which was then announced by the race director with a lung-busting bellow (forgetting to use the loud-hailer in his hand). We were off. I soon tagged on to David Tillett, and ran on his heels round the green. As we passed in front of the pavilion, who could I spy? My parents!! I knew they were in Aldeburgh today, and I’d told them I was racing in Saxmundham, but I never thought they would drop in… but they did! This put a little more wind in my sails. 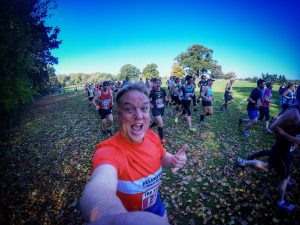 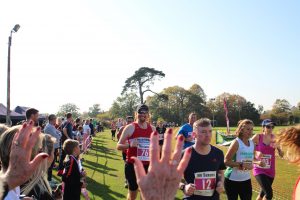 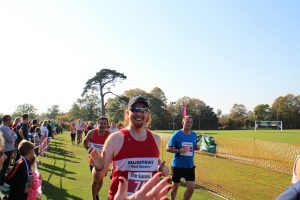 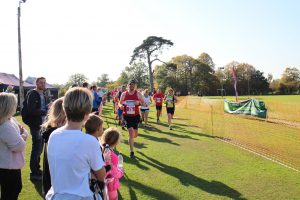 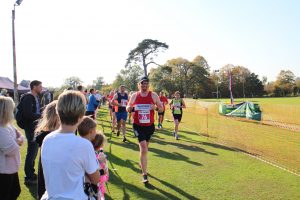 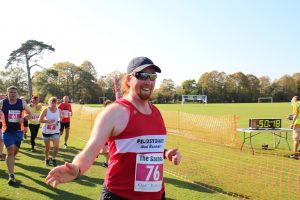 As we passed in front of the pavilion for the second time, and giving my mum a second high-5, I realised the chest pain was now kicking in again. I ran to the main road, but then needed to walk. This did now mean I wouldn’t make any of David’s selfies, but really it was a sacrifice I needed to make.

I was passed by a few FRR along this straight. Carita. Jo Whelan. Eli. Rod. All asked how I was, and I replied with the standard “I’m fine… just this stupid chest thing. I’ll catch you up.”

As we rollercoaster-ed through the residential area, supported by cheers of some locals in their dressing gowns, the pain subsided, and I could start making ground back.

It honestly felt mostly up-hill. Gently uphill, but uphill nonetheless. As I scalped those who had overtaken me, I could see Jo Whelan off in the distance. I needed to catch up with that Rocket! I plodded steadily up through the field and breathed in the autumnal perfume of rotting leaves in the woods. Lovely. However the heat was really beginning to affect me. There was no water out on the course, and by mid mile 3 I could really have used a refreshment. Suffice I needed to push on, and soon had leveled with Jo, and even passed her.

Passing the entrance we’d only passed fairly recent was quite demoralising, but I pushed on. I could see David Tillett off in the distance, but with less than a mile now to go, I stood no chance to catch him back up. I was very fatigued with the lack of hydration, and I was keen to stay safe.

As we pulled back onto the green, I could see the finish, and a very dispersed set of athletes in front of me, and even as I cruised down the back straight, towards the raised high-5 from Gripper and a burst of enthusiasm, I didn’t know who was behind me, nor how close they were.

As I turned up towards the finish line, veering up a slight incline, I could not only see the official timer with a 48min figure, but could also see FRR’s very own beastmaster, Solly, screaming. “Jo’s on your tail JJ! You’re going to have to push to retain that position. Sprint!!”. But I had nothing in the tank at this point. 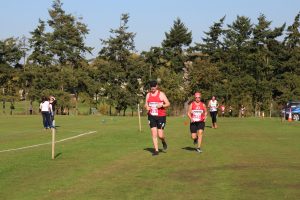 JJ gets pipped by a Rocket

I glanced up at the time again, and it had just clicked over into 49:10 now, as Jo “Rocket” Whelan pipped me. And rightly so. As I crossed over yet another spray-painted line I heard Robin cry “Well done Jenkyn. You’ll be happy with that time. Good effort.”

Two bottles of water, one banana and a slice of lemon cake later, and I was basically back to normal. 49:22 by my watch, which I was delighted with. 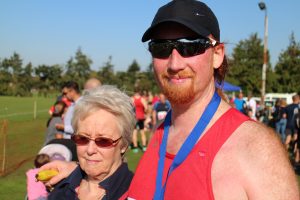 Me and my mum 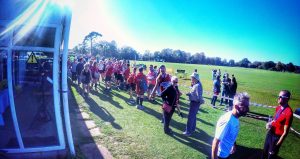 Me and my parents

A debrief with the crew illuminated that it was a very good day in the office for FRR. Robin snagging a 33:09 time, Ben narrowly breaking his 30min barrier by some 6 seconds, and a trophy each for Helen Duggan, Sarah Finch and David Solomon. Nice one team!

It’s an odd race really. It obviously thrives on the TPC nature. With some 165 athletes toeing the start-line with me this morning, I’m proud to see such strong support from FRR here. It’s not a particularly fast course, nor is it especially scenic. But it is testing and varied. It has a little of everything really: Field running, tarmaced roads and gravel tracks with bridges through woodland. All mixed up with a superb marshalling team. This race could easily accommodate twice or more competitors, but I like the fact that it shouldn’t. It’s a really dinky race, and I love it.

So that’s it folks. That’s my last race of the year. What are your highlights this year? Have any of my reports encouraged you to keep an eye out for a particular race next year? Or maybe you’re interested in joining me for 12 of the best next year!? Watch this space!

I’d like to take this tiny opportunity to thank each of you who’ve offered me lifts to and from races and training this year. My recovery is still not over, and it’s simple practical things like that that make a massive difference for me. You know who you are. #BackYourself