There have been several discussions about these two topics, so I thought I’d try and explain the FRR/UKA position on them both in this short post. 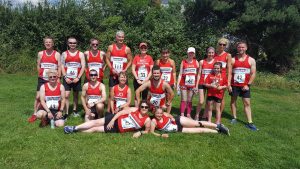 Every UKA affiliated club in the UKA will have a set uniform used to identify its members at races. For FRR this is a red top with a white band, with Felixstowe Road Runners written in black inside the white band. The only agreed version of this top that represents FRR club colours are those sold through the FRR Website. [Juniors have the “shoe’s logo” shirts they may wear for club races; This liberty is not extended to the Adult competitive membership]

You may add your name/nickname to the vest/t-shirt to help supporters encourage you during your races. We’ve found that positioning your text in the upper red segment on the front of the shirt in black text is the best position. There are several reputable businesses who can do this for you, or there is iron-on lettering you can buy to do it yourself.

If you are an affiliated first claim member you are required to wear either a FRR Race Vest or FRR Race T-Shirt when participating in organised races where you have registered as “Affiliated”.

FRR are generally happy for affiliated members to wear their race colours at races which are not part of the UKA affiliation programme, such as some of the obstacle races or triathlon events our members also participate in.

If you are running for a charity, or for a personal reason, you may choose to register for a race as “unaffiliated” (even though you might be an FRR member) which gives you the option of running in non-FRR colours. Remember though that your race will not count towards any FRR records or awards.

If you were given entry to a race by FRR, you are required to wear club colours.

So this is things like the Virgin London Marathon places we are allocated each year, as well as the Suffolk Winter League, XC Championships and Ekiden Relay events. If you do want to supplement your race by affiliating with a charity instead, you may add extra garments to your outfit, but your FRR club vest must be clearly visible throughout the race.

If you are not an FRR member, or are a social member, you must not wear FRR club colours at UKA events.

We can’t stop non-members or ex-members from running in our colours when out training or at non-UKA events, but it is a serious breach of UKA rules to run in the colours for a club which you are not a competing member. If you see a non-FRR member running in FRR colours, we would ask that you raise your concern with the race officials and with the FRR committee directly.

“Second Claim” is a term that is often bandied around, but there appears to be some ambiguity over what it actually means. So let’s clarify!

This obviously requires some discussion between the clubs and the athlete in question. Generally though, common sense prevails. If no other athlete is running in the race from the “First Claim” club, it’s very likely a nominated “Second Claim” club can capture that athletes result as their own.

The only exception to this is where the race is being hosted by FRR. If you are second claim FRR, and want to run at any of the races we host, we require that your first claim club forgoes your claim to us, or you do not run. We believe this policy is both fair and fairly universal.

In all other respects (i.e. to training with FRR or social events) second claim members are have exactly the same rights to club privileges as first claim members.

If you have any further questions on these topics, please do contact me or any member of the FRR committee.