Yesterday evening the FRR AGM 2017 was held at the Felixstowe Lawn Tennis Club.

Not withstanding the notices and announcements (which will be distributed in the meeting minutes to follow), one of the main topics was the election of new offices into the FRR Club Committee.

After some 9 years sitting as club chairman, Richard Farnworth announced his retirement from the role, paving the way for any member of the club to take up the reins. Mark Ford, an already well respected Run Leader and Race Director for the Coastal 10 club race, was proposed and was unanimously elected by those present to take Richards place as club chairman. COngratualtions Mark, I’m positive you’ll do well as chairman of FRR. 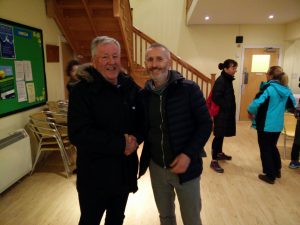 I am personally excited to now hold position in the club as Secretary, taking over from Simon Wiggins. These are going to be big shoes to fill… no litterally… have you seen the size of his shoes! :)

Please join me in thanking Richard Farnworth, Simon Wiggins and Ray Roberts for their efforts to make this club as successful as it now is, and congratulate and welcome the new club committee to their new offices! Head over to the Club Committee page to see who the FRR club committee for 2017-2018 are.

There will obviously be a short transition period as new officers are inducted, but hopefully all you’ll see is a graceful gliding swan!