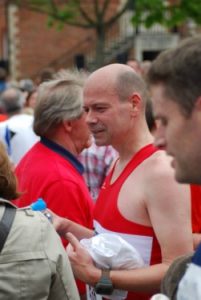 Firstly thanks to Ben for the nomination and being the first read of the New Year, Happy New Year everyone.

How did I get into running?

Well for those avid readers of all these profiles, you may get a bit of déjà vu, as there are a few similarities at the beginning of this read to another one!

Back a mere 11 years ago; Christmas time I think (I had probably had a few to drink!), we were talking about the Woodbridge 10K and how my sister (who had ran the race the previous year, and was a keen runner in her teenage years running for Ipswich Harriers) reckoned she could beat me. She was in fact so confident that there was a wager placed, all for charity of course, of which the loser had to cough up. Now I was reasonably fit due to playing football most weekends, but having never ran a race like this before, I was unsure exactly how to go about the training, or indeed how I would actually get on in the race – but never mind I thought, I’ll give it a go.  I knew I wasn’t going to be beaten.  Over the next few weeks I attempted some solo training, and some training with Sam, usually about once a week, which seemed enough to me at the time. Most of this was going OK (although I never actually ran further than 5 miles), however, I told my sister I’d done virtually no training just to try and keep her in the dark and surprise her on the day.

Anyway, this was back in the dark ages when you had to ‘post your entry’ into the race, and would you believe it I got an entry, but my sister forgot to enter (like hell she did!).  I still set myself the challenge of completing the race quicker than her time from the previous year. Race day came, and although nervous I ran the race and made it just under my target time of 50mins in 49:35, tired but very happy, and I beat her time, so 1-0 to me.

It was then not long after this that Sam and my brother-in-law Andy were looking for a friendly running club.  Sam had previously been running for a different running club but it didn’t suit him, so we looked around and decided to join Felixstowe Road Runners, a superb choice.

And so it came to the following Christmas and once again the challenge was laid down by my sister, with double the stakes, this time we both got in and the race was truly on. With my 1 year worth of training and encouragement from the club, I once again achieved greatness and won the battle, 2-0 to me. Every year I now try to ensure I enter this classic race to keep those memories of what got me into running alive.

For me my most memorable race was the Martlesham 10K 2014 when I set myself a goal of a sub-40. I spent the summer training up just for this race. For most of the race I was constantly checking my watch, calculating out my expected finish time. I was 30 seconds up at ½ way, just about on schedule with 1 mile to go and pushed all the way to the end, 39:55 – this says it all, set an achievable goal, put the training in and there’s a good chance you’ll make it. 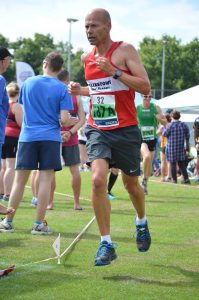 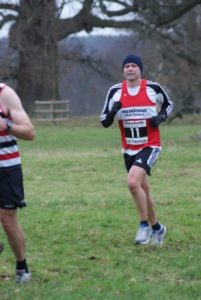 There are lots of favourite races, especially for me the shorter ones, the Friday Fives, Ekiden Relay and the Cross Countries to name a few, but if I had to pick an overall favourite it would be the Round Norfolk Relay race. It’s held every year up in that other county Norfolk. I haven’t missed one since 2012 when Tim Finnegan convinced me to step in at the last minute to take on stage 15. I remember coming home and informing Jo who said ‘have you any idea where you’ve got to run and what sort of time you’ve got to get up in the morning? I hadn’t a clue but that never stopped me. In 2018 I made my 7th appearance running the first stage at just over 17 miles, and even though I came over the line nearly dead, it was enjoyable all the way, running with Darren from Fram Flyers encouraging each other throughout. For those that have not experienced the fun of running this unique event, early morning starts, midnight runs chasing down other runners’ flashing yellow lights, waiting in the middle of nowhere at the change-over points, or assisting the stages by biking alongside or following by car, you don’t know what you’re missing, come on, put your name forward and join in for 2019. 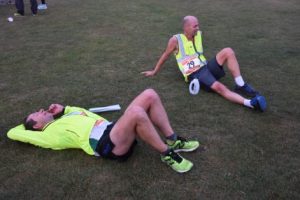 What does the future hold?

For me, running, racing, training, as long as they are still enjoyable – I’ll be doing them all.  In 2018 I covered over 1500 miles and ran over 36 races. Even though I’ve now hit 50 and become a granddad, in 2019 I’ll still be aiming to beat my PB’s and some of the youngsters in the club! 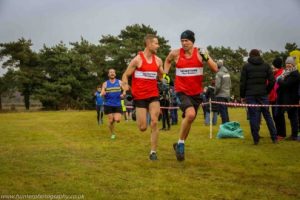 Finally I would like to say thanks for taking the time to read this and hand the baton over to Stephen Shaw for the next instalment.