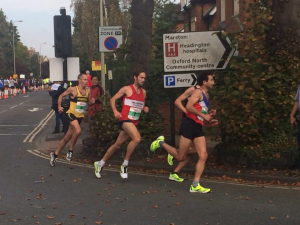 I’ve been asked this a few times and I have found it difficult to remember why I actually tried it in the first place. However, I do remember my first proper race, I was only 15 and the Felixstowe half marathon in October of 2004 had a junior race along the prom. I turned up wearing my basketball shoes and managed to win on my debut. Astonished by all, I was over the moon and wanted more. Nigel Dadge who coached the juniors at the time advised me to race at the Martlesham 10k junior race a couple of weeks later. My dad had driven me over to Martlesham and when queuing up for the race, I had noticed the entry form said a minimum age of 15 for the 10k. I asked my dad and he tried to persuade me not to because I had never run that far before, but I didn’t care, I was going to do it. This is where I met Christina Howland who paced me for the first half of the race who then said “go on Josh, I’m holding you back” or words to that affect. I then went on to run 43:40 for my first ever 10k. That’s when it really started!

Woodbridge 10k without question. Never a PB course, but the atmosphere is incredible.

This is a toss-up between running my 10k PB on the track in Bedford and winning my heat at the British University Indoor 3000m championships this year. Both moments gave me that feeling of euphoria. I think the indoor race pips it because of the uncertainty of my fitness and being in 4th with 200m to go, sprinting past 3 opponents with barely any track left, scoring a PB in the process (8:32). This then led to me coming in 8th in the final the following day in another PB (8:30). To watch the race click on the link below.

Biggest race planned has to be the British Milers Club event in Oxford which I’ll be competing in the 5000m. Realistically not looking to PB with the injuries I’ve accumulated this year, but perhaps something in the low 15 minutes based on current training form.

Last year I was fortunate enough to go to Edinburgh and catch some of the Fringe festival which was amazing, but alongside this, I was with a few university running buddies and we went to a few highland games competitions where you can do track racing (but on grass). The beauty of these are that they handicap all the contests, so the best runner would run the mile in the mile race, but the 82 year old would only have to run 800m of the same race. It’s a brilliant spectacle when the organisers get the handicapping correct because it then comes down to a dip finish between all abilities. Bit of cash helps too, hence my return this summer.

Coastal 10, Ipswich half marathon and cross country racing is the only racing that I have pencilled in right now. I’m not the biggest fan of cross country, but it’s fantastic training to keep you sharp for when it really matters when chasing down those PBs.

2017 is over 6 months away. For someone who doesn’t know what he’s having for dinner this evening I think planning ahead to 2017 would be a bit of a stretch!