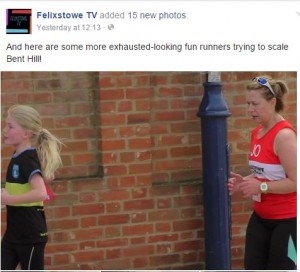 Without wishing to steal thunder from other recent major events such as the VLM, Bungay, Brighton, Jersey marathons etc  we can’t fail to record on this site another of Suffolk’s Premier running fixtures which took place recently namely the Rotary Club of Felixstowe Charity Fun Run!

This took place on 4th May Bank Holiday Monday and for once the weather was uncharacteristically great. Well over a dozen (maybe 13?) FRR runners took part in the event wearing club colours, comfortably outstripping those bothering to show up for the London Marathon.  Better still there were innumerable (well I couldn’t count them) FRR Juniors also flying the flag and doing us proud. The only fly in the ointment seemed to be that the rest of the town had also turned out in bright red including a large contingent of youths sporting some impressive “Langer Road Service Station” strip.  They seemed to spend the run alternating between either sprinting very very fast (along the prom) or walking (along the top)!

Speaking of which, the course itself was a killer. As many one mile circuits as could be completed in one hour, with the sponsors coughing up on a “per circuit” basis. Starting at the Pavilion, along the prom, up Bent Hill, then Hamilton Gardens, down Bath Hill and back along the prom to begin the torture all over again – and that oh so exquisite torture that is Bent Hill once again claimed its share of victims including myself, putting my left knee out of action for at least a week.  Many of the Fun Runners were a good deal more sensible and decided to walk it instead.  As usual, Felixstowe TV caught all the action on their Facebook page (above).

I’ve no idea how many circuits FRR managed to achieve and how much was collected for charity but I saw some valiant efforts in progress even if we were outclassed by several small children and a man dressed up as a dog.

Preparation for next year starts now.