I thought it would be nice this year to do some profiles of some of our fellow team mates. On the first of each month, runners will be interviewed, with their answers being published here. The interviewee for one month selects the interviewee for the next month. Our chairman (Richard Farnworth) selected Will Schwer for the Chairmans Award, and so we’ll start there! 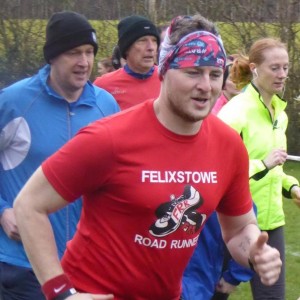 Really it was dad that pulled me into into it. It was amazing seeing how he was getting on and how much he was achieving. Although admittedly when I asked him about his races and he started the talking about his splits and pace per mile I had no idea at the time how to put any of it into context.

I’d started to stop smoking and drinking at the beginning of 2014. I’d been swimming and cycling a fair bit but in April he more or less dragged me along to Ipswich Parkrun! It went pretty well apart from me needing to have a tactical chunder after I finished!

I managed to chalk up another 5 park runs and a couple of Friday 5’s. I joined the Road Runners around this time which was fantastic and very encouraging to belong to such a nutty group!

Unfortunately a combination of my first proper injury side lined me and the loss of a close friend through drink at the start of June actually sent me back onto the cigarettes as well as out drinking every night again.

After turning 30 in August a friend and my self headed to Vegas at the end of September to celebrate the passing of our twenties! When I arrived home decided to knock the drinking and smoking on the head again then to resume running… I’ve pretty much been on it ever since, meeting more and more of the Road runners along the way. Making some incredible friends and getting to share in their personal achievements and the odd close shaves! FRR has definitely made a huge difference to the direction my life had been heading in!

I’m hoping to complete the Great Barrow Challenge commencing at the end of June, running 10 marathons in 10 days.

I’ve also entered the SVP100 for the attempt.

In the longer term I’m seriously considering trying to join the 100 marathon club. I’ve got 15 marathons booked in already this year ( including A favourite of a certain club captain ) and hoping if I stay injury free to enter a few more.

I’ve been really struggling with this one, so many races have been brilliant for lots of different reasons from atmosphere to the scenery that surrounds them.. Just edging ahead is probably the Woodbridge 10k. The weather was lovely, the atmosphere was unbelievable. There was so many FRR members either running or spectating I felt like a was smiling almost the entire way around the course. Even Dry bridge hill didn’t seem so bad with all the cheering we received on the day. Having spent so much time working in and around Woodbridge it made it feel special somehow. Every time I go through there now I think back and what ever mood I’m in it still makes me smile.

It’s hard to pick out a favourite moment as there have been so many great ones! I love the way FRR have such great comradeship. You can finish a race in twice the time it takes the faster athletes to finish and they are still waiting there at the end cheering you over the finish line!

I’ve had the privilege of running along side some amazing people both from our club and others on my travels. I’ve been lucky enough at times to share there first attempts at certain distances or with them as they’ve gone for PB’s. Sometimes they’ve been struggling and it’s been nice to offer them some encouragement to get them to the end without them realising that they’ve helped me make it to the end just as much!

I think my favourite of all these and hopefully this will not embarrass her in any way was getting to see the utter joy and emotion as Kate Long crossed the finish line of a tough Ipswich Half! I believe it was her first half and she’d battled her way right the way through to the finish. You could really tell how much it meant to her conquering the distance and I caught my self thinking ” yeah, that’s why we run! ”