It’s never quick and it’s never pretty, that sums up my running!! So why do I do it?? It’s simple, because I can.

I have always loved sport, anything and everything but swimming was always top through my school years. I started with lessons, at Deben pool, later joining Deben swim club, where I swam three times a week with galas at weekends. Not really enjoying school, swimming was my happy place.

Turning 16 I found cigarettes, alcohol & boys!! So most things sporting disappeared for a while, with only the odd young farmers’ team event to keep my sporting self-happy. Getting married and having children followed allowing no time for exercise. I wanted to do something for myself but had lost all confidence, then I plucked up the courage to join the gym, met some encouraging people and the bug for exercise was back.

Race for life was my first attempt at running, the 5k at Trinity Park, 12 years ago. Having been hypnotised to stop smoking I finally felt I was getting fitter, who knew what was to follow.

Completing the 5k in 27 minutes I was very proud. I spoke to another new runner and we decided the Kentwell Hall 10k was the next thing to do. On an autumnal Sunday morning we set off, she went off like a racehorse leaving me ambling along behind. I met lovely fellow runners to chat to on my way round and that has been my motivation to run since!!

I kept plodding along doing local runs, but didn’t feel my running was worthy of joining a running club. A few year on I was persuaded by the same friend to join a running club but after one session was politely told that I needed to improve a great deal to make the most of their sessions – I did not return.

Swimming has always been a large part of my life and after an evening swim bumped into a friend who was doing the London triathlon, Olympic distance, on finding the distances for each discipline I thought I can do that, much to my husband’s surprise and shock. I signed up to a charity and it all began – I loved it!!

Triathlon day dawned, under 4hrs would be my target. I completed it in 3hrs 28 I was delighted. After the race my husband realised that I was already thinking about how to do it faster. I denied it but knew if I had a better bike and worked on my running I could improve……. he later asked if I thought he could do one too that’s when it really began!! Having a training buddy made it easier to get out…. we signed up for the Blenheim Palace tri (sprint distance) the following spring. Swimming wasn’t his thing but the cycling and running he loved and soon was quicker than me (I created a monster).  We started together but soon got parted in the melee of swimmers, I exited first and managed to have a big enough gap so he couldn’t catch up, I finished ahead of him, the only time this happens.

I did London tri again this time 3hrs 8 mins. We did Blenheim again and that’s when we decided to do more running we did Norwich half marathon, Stuart finished in 1hr 59 min in front of me but yet again I had chatted with lovely people, soon nobody asked my times they just asked who I’d met!

The London triathlon followed this time in 2hr 28mins with 10K in 55mins my best ever.

We carried on running races too numerous to mention.

In 2015 watching the London marathon I decided we needed a bigger challenge, so unbeknown to Stuart I put us both in the ballot. We decided that if one got in we’d both do it, the other would do it for charity, fundraising together. Amazingly Stuart got a place – training and fundraising began. We raised money for Alzheimers UK and Asthma UK charities close to our hearts, Asthma UK as my dad and other family members have suffered from this and Alzheimers UK because my dad was diagnosed a few years ago.

Training went well my aim was just to complete. Stuart and a friend started from a different start finishing in under 5hrs. Yet again I had met lovely people but then crossed the line an emotional wreck. London done where next? Half iron man sounded right for me so I sneaked an entry into the Hever Castle tri, training began in earnest and I completed the majority of the plan when my dad became ill, and was hospitalised. Dad’s health deteriorated and was admitted into a nursing home on the weekend of Hever. I pulled out – I am still hoping to achieve this dream. 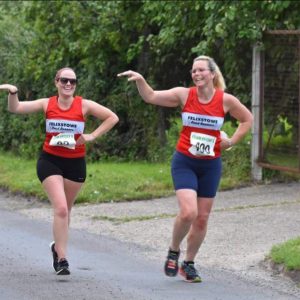 That summer I came along to my first road runner session and found it was ok to be of a different standard to everyone else… I kept coming back!! I’ve met some lovely people especially Hayley who got me into writing this, a regular running buddy always willing to listen to my moaning as we run, thank you. 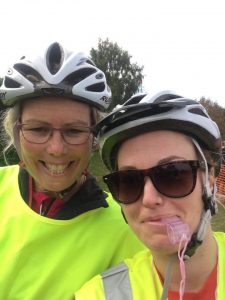 London done, we decided on Edinburgh for 2017, we trained, On the Sunday it dawned bright and sunny as we started it got warmer reaching 23 degrees, the coast road was relentless, many fell by the wayside, Stuart a bit slower than London and me a bit quicker. As usual I chatted my way round, strangely most I met were from Suffolk, I completed the last 9 miles with a lovely lady from Beccles, keeping each other going.

A change was needed so I signed up for a bike ride from London to Paris, for the hospice in the September of last year. Stuart decided, due to farming commitments, not to but did later regret that!

Unfortunately my dad passed away in the August so training was halted for a while, but I knew this was something dad would’ve wanted to see me do, I went for it. It was an amazing experience. I’ve met some wonderful people who got me through it on my darkest days of the trip. To this day we keep in touch and meet up for rides. Some of us have just signed up for Venice to Rome in 2019 this time Stuart is signed up too!!

This is a special year for Stuart – we have decided to aim big and along with our friend Megs we will be running the New York marathon in November, in memory of Meg’s mum, raising money for the hospice again. It’ll be emotional but amazing. Very early morning training has begun!! I shall hopefully be able to get along to club more regularly now as long as work & family commitments permit.

Running has given us something we can escape work/family life even if for a short time.