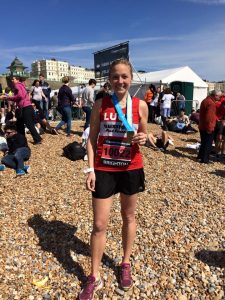 It feels like running has always been part of my life but it most certainly hasn’t! Like many women I decided to give it a go when I wanted to lose weight for a holiday. I think this was when I was around 20, which means I’ve been pavement pounding for nearly 13 years.

I had never been a natural athlete and none of my family members were even slightly interested in exercise but I was massively enticed by the challenge. I still remember the first attempt – feeling like there must be something medically wrong with me to find running so horribly hard. Thankfully no, I was the same as any newbie runner – painstakingly finding my lungs and slowly increasing my distance inch by inch. I entered a Flora 5k race in Hyde Park in 2004, and still remember the adrenaline high when I crossed the finish line (I have no idea what my time was and back then I wouldn’t have cared). Little did I know that this would be the start of a complete life change.

I did lose some weight and soon became hooked. I’d been running with my lovely brother for a while and he was moving away for work, so I decided to join FRR for some company and motivation. The club was extremely different then to how it is now, with lots of different faces, but the same welcoming spirit and fantastic team ethos. I was lucky enough to discover Christina Howland and Sallyann Pearce, among many others, such as Phil Cooper, Kate Sherwin and Adrian Hine, who were to become the first of many close running friends who supported, encouraged and provided company week in, week out. They would be the team of mates (apart from Sallyann who doesn’t do long distance!) who I completed my first marathon with in Dublin 2004. 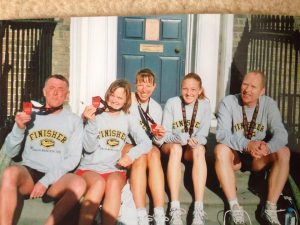 It occurred to me whilst thinking about writing this that ever since joining FRR, I’ve never had a prolonged absence from the club, apart from when ruled out with injury or when I was away travelling. I absolutely love it and could never dream of leaving, even when my relationship with running is littered with such highs and lows! I’ll never be up there with the quickest, I also know I’m not the slowest, I’ll never feel confident enough to ‘back myself’ in the way I should, but I love running and I love our running community. Running provides mental therapy like nothing else – I still remember going for my first post-baby run when Leo was 6 weeks old and the wonderful Christina had come over to hold the baby. When ravaged with sleep deprivation and a crying, clingy baby, getting back out in the fresh air to run was bliss.

I am a massive race dodger, and that won’t ever change. But those of you who know what kind of panic I get into before a race will understand why that is the case and why I really shouldn’t subject many others to it! If only I could bottle the high at the end of the race and feel that at the start – I’d be racing as much as Harper! Looking over my running career I am really pleased with what I’ve achieved. Never in a million years did I think I would run a marathon. The very idea of running for that long seemed impossible. I’ve now completed 5, which shows that anything is possible and anyone can do it if they put their mind to it and have the support of family and friends.

This is soooo hard. I’ve had some great ones. I think it’s a three-way tie….. 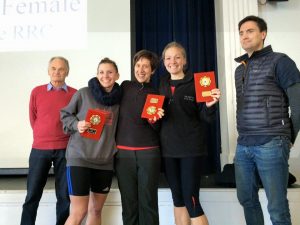 There’s lots of these too! Every time I have crossed a marathon finish line, seeing friends achieving their goals, winning lady runner of the year and club member of the year, Twilight 10k PB last year, seeing Leo and Chris during London, but one of the best ones was quite recent. Last year’s Tarpley 20 was a mixed race. I’d started with zero confidence, then enjoyed most of it with my marathon training companions. The final couple of miles turned into a race with Shabba who suddenly decided he was going to try and beat me…..I knew I had no chance in a sprint finish so had to get to the green long enough before him. I somehow finished with a sub 7:30 mile, but the ‘best moment-bit’ was when the race was over and we heard that we had won the female team prize. Michelle Gordon, Sarah Parker and I were crowned team winners! Both Sarah and Michelle are close friends of mine and amazing athletes so I was very proud to be sharing the prize with them. We were all so chuffed and had a fantastic afternoon celebrating.

Who knows!?! I haven’t hidden the fact that my mojo has gone awol since Manchester this year but I’m confident it’ll be back. Despite losing all form, I’m still running regularly and also cycling to keep my fitness up. I will be doing the Wattisham Sprint Triathlon in October and will have a bimble around the One Lap to Ultra but that’s all that’s planned this year. I have another GFA place for London 2017 so assuming I learn how to run again, I hope to enjoy it as much a second time. In the meantime, I’ll keep loving being an FRR, supporting, training and minimal racing….:) 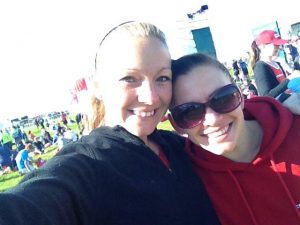 Lucy and Michelle at London Marathon 2014

My running inspiration and all round machine – Michelle ‘Flash’ Gordon.