Firstly thank you Sarah Severwright for my nomination, I must say I was really enjoying the read until I saw who was nominated!

I have to admit that I was always one of the sporty ones at school and tried my hand at any sport I could as long as the distance said ‘sprint’! I was, despite my height fairly competitive especially at the 100m, hurdles and long jump and spent many an evening and weekend training and competing for the mighty West Norfolk AC. However if someone mentioned even doing a whole 400m lap I was not keen and thought people who ran marathons were superhuman! My other main sports were swimming (where I specialised in 50m sprints!) and gymnastics.

Again, due to my height I was the ideal person to be involved in sports acrobatics where I would be sent up to the top of the pyramids and thrown about by my partners. I once even got to meet the queen whilst doing sports acro, even if I was upside down at the time!

I also enjoyed the usual netball, rounders, tennis and badminton doing these at school and outside which now that I am a parent makes me realise how tiring this must have been for my ever willing parents.

Unfortunately when the age came to start drinking and have fun I stopped all of these sports. Once I got to university I decided to join the women’s football team, where the worst thrashing was by Chelsea ladies who beat us 22-0 in the Surrey cup. I decided at this point, professional football wasn’t for me! I was also part of the uni ski team which involved slalom dry slope ski racing and a huge amount of alcohol!

Once I graduated from university, like many women I decide to take up running as a means of losing weight and keeping fit. This continued to be sporadic for many years as I started my career and moved around the country, until me and the hubby decided to enter the Great North Run. We ran it for the first time in 2007 and we soon got the bug and entered again for the following year, managing to take 15 minutes off of our previous time. I again at the end of each of these half marathons looked on and wondered how I could ever run a marathon. 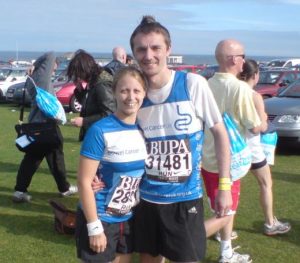 Once I had been to support my other half run the London Marathon in 2014 I was totally bitten by the bug and the intoxicating atmosphere and immediately entered the ballot. Of course when that magazine came through the door and said acceptance I instantly regretted it! April 2015 came and I with very little idea of how to train for a marathon managed to get around those 26.2 miles and loved it even more than I had imagined. I was especially pleased with my 3.51 as it meant I had beaten the hubby’s time from the previous year by nearly an hour!! Plus I was really proud to have raised £1000 for Clic Sargent who help many of the children I work alongside.

I do remember on my way around cheering a FRR along as I was so pleased to see a familiar name of a local club, and how friendly they were. 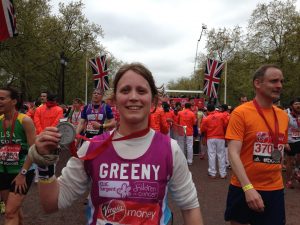 Fast forward to March 2017 and having had a second little girl I decided I needed a bit more motivation to run regularly, especially with another London Marathon to train for. On the recommendation of Mark Ford (my husbands boss at the time) I went along to my first FRR Tuesday night session. It was lovely to be greeted by such a lovely and inviting group. It is great to see that even in the time I have been a member the club has continued to expand and welcome in many more members.

I don’t have too many to chose from here having only done a handful of competitive events but I have loved this season getting to run in red for the first time and see the support and camaraderie amongst the FRR members.

I loved getting myself to a half marathon P.B at the GER last year in my first event in the Felixstowe Road Runners vest, even managing to get myself on the front of the Ipswich Star! 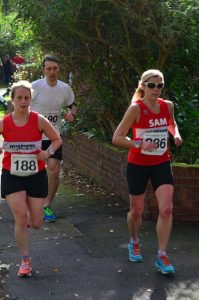 I also loved the battle I had with a few of the lovely FRR girls at Martlesham 10km. It was a close battle between Marion, Sam and I which pushed us all along and helped me to a P.B but I am sure they will return to thrash me next year!

Another favourite race has to be the Hadleigh 10, on a cold but sunny crisp day I was hoping to be battling again with the girls however unable to walk let alone run at the start I decided to run the race with Liz Atkins and once we had met up with Jen Evans we put the world to rights and had a very enjoyable run with an equally good gossip!!

Despite struggling with a number of niggles over the past few months I am now officially training for London and am planning Great Bentley, Tarpley 20 and Stowmarket Half as part of that and hope to see many of you reds at these events.

The plan for this year is more parkruns (as I have never really got into it!), my first triathlon (St Ed’s Tri booked) and lots of events I have never taken part in before such as the Friday 5s, HR24 and Coastal 10. It looks like its going to be a fun year!

Nominee for next month

I know there will be lots of people wanting to hear this story, so I would like to nominate my lovely team captain from the Christmas party Harley Quinn a.k.a Sarah Fitch. Over to you Sarah!