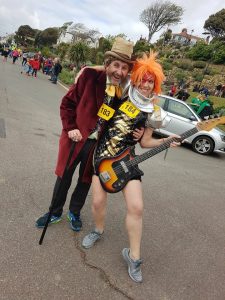 I can’t quite believe I am writing this. I am not into sport in the slightest and I know nothing about it. I hadn’t owned a pair of trainers since I left school, I am really not a trainer kind of person and I’ve always had an issue with trainers and sweatshops.

Having said that I played hockey at school and was always picked from my team to enter the 100m sprint and the Hurdles on Sports day but I always came third so it didn’t fill me with much confidence in my ability. After injuring my knee doing the hurdles it was a relief to not have to take part any more, I now no longer had to stand at the start line gripped with fear waiting for the whistle (you’d have thought my adrenalin would have been enough to win the damn race!).

So, in 2016, when a friend told me she had downloaded the BBC couch to 5K app and asked me to join her I don’t know what came over me, Midlife crisis? But I had already bought a convertible – couldn’t be that, mind you I had noticed a lot of people hit their forties and start running. I had also heard a bit about running and mental health. I have over the years had several severe depressive episodes and maybe I thought running would be a good way to ward off any future episodes.

Anyway, for whatever reason, off I trotted into the alien territory of Sports Direct and bought a pair of trainers and that same day I found myself on the prom one rainy evening in June 2016 in my new pair of trainers and some yoga trousers from the 90’s! Off I went and ran for 1.5 minutes and walked for 2 minutes like the app told me. When I got half way along the prom I turned around and realised I had left my friend behind, it was now pouring with rain and she was shouting “save yourself, leave me here” So I did. I ran back to the car and waited for her to catch up, she arrived wheezing and spluttering and never ran again. I however, was hooked.

I’m not one to do things half heartedly so I ran nearly every day for the next two weeks so that I could beat the app and reach 5k before I was meant to. That wasn’t the best idea as I could feel my old hurdles knee injury start to rear its ugly head. A bit of physio later and I reached my 5k easily and well within the date the app predicted.

So my running continued for a while at 5k most mornings throughout the summer. I finally knew what it felt like to sweat! I gradually started to run a bit further and someone in my family muttered something about “ doing a Marathon next”. I had absolutely no intention of doing that though! Not until I was running through Walton one Sunday morning and someone over took me and I asked him what speed he was running, we chatted briefly and he told me that he was in FRR and that Brighton Marathon places were opening that coming week. I wonder who that person was…

So, having got a Charity place at Brighton I thought maybe I ought to enter a race just to see what it was like. I picked Hadleigh 10 as it was my home town and I knew the area. All week prior to the race I panicked, it was far to reminiscent of school sports day feelings for my liking, whatever had I done? “You fool! You might come last, you absolute idiot!” 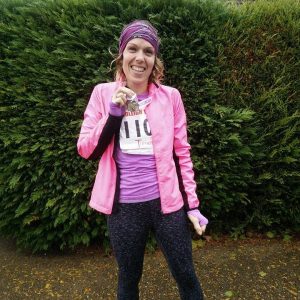 The day arrived and it was rainy and windy, with a bit of luck the race would be cancelled. I got my husband to drive me to Hadleigh really early, The race wasn’t cancelled and the adrenalin and my Dad waiting by the church to cheer me on pushed me round those glorious hills. I remember seeing a lot of FRR T-shirts and being overtaken by Paul Osborne and Adrian Hine who chivvied me along as they passed me. I felt really bad overtaking a woman that I had been following most of the way but I had a last minute energy spurt and I finished 133rd out of 282 in a time of 1.24. I didn’t come last! I also discovered that there were age categories in races too, who knew?

Having chatted to Ozzy ( who I knew through having kids at the same school) about Marathon training he suggested that I join FRR. Join a club? A sports club at that? At night? In the dark? (I’d rarely run in the evening and my night vision isn’t the best). Surely I couldn’t?
But I did. I reminded myself I had already joined a Bootcamp and Yoga and survived so surely I would be ok at Road Runners? Plus I could talk about running to people who liked running too and my husband wouldn’t have to listen quite so much.

I turned up one very cold January night in 2017 ( I nearly didn’t go I was so anxious) and was surprised at the amount of people there. I was made very welcome and met Bex Miller who had joined the previous week and Carrie Kemp. I turned up very sporadically that winter as I wasn’t very confident running with other people and I don’t like the dark. I only went if Anika messaged me to meet at The Orwell. Carrie has taken over this role now with her running bus!

I “trained” for Brighton sort of. I entered Stowmarket Half as part of my training, ran to Ipswich and back and then Kesgrave and back and hoped that I would somehow be able to stomach the energy gels and get to grips with carb loading. I didn’t and still haven’t. 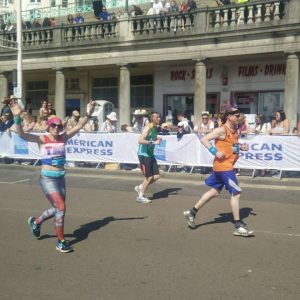 I found Brighton one of the loneliest experiences of my life. I got to around mile 18 and felt a bit odd. “Maybe I should just go and hide in those loos over there for a minute or two?”
“Don’t! You will never get going again! Plus you have money riding on this- this is a charity place remember?? You will have to pay all the money back!!”
I plodded on in 20 degree heat, past people falling by the wayside. Suddenly a man came running over to me and he knew my name! He was clapping and saying “Go on Sarah! You ok?” I just managed to nod at him. It was all I needed to spur me on, someone knew I was there! I wasn’t alone! It turned out it was Jason and I don’t know how he recognised me but he saved me that day, made me see what FRR is all about – Support! I finished the Marathon and felt ok but was furious with my time of 4 hours and 3 minutes. If I had managed it under 4 hours I wouldn’t have felt the need to run it again but seeing as I had been running for less than a year I should have been pleased I suppose.

Not sure that I have a favourite race but I did several races during 2017 ( although a calf injury left me on crutches for 8 weeks so I missed out on a lot of the summer races) I particularly enjoyed GER and Coastal 10. I like those kind of distances, I have come to the conclusion that my mind isn’t strong enough for Marathons. There was a lot of support along the way at both those races and I need that. Dave Solomon talked me through the last few miles of one of the Friday Fives and although I felt sick at the end fighting talk was what I needed! 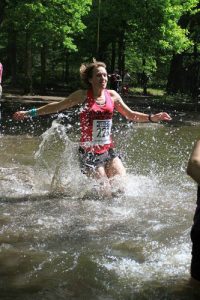 I really enjoyed the Para’s 10 in May too, running through swamps with smoke bombs going off and being “shot at” funnily enough speeded me up and I managed to beat my previous 10 mile time from Hadleigh 10.

Plans for the next year

Looking forward to 2018 I have bizarrely found myself as Event Director for Felixstowe parkrun. I’d attempted Kesgrave early on in my running career but after arriving after it had started I got put off and went home in a strop. About a year later I thought I would give Ipswich parkrun a try to see what all the fuss was about. I loved it and put out some feelers as to why Felixstowe didn’t have one. From April it will have!

I want to continue “running around” as my husband puts it, across the fields and along the Prom and getting that glorious feeling that sets me up for the day! I might even do a few races too as I’ve found the more I do the easier that start line feeling gets plus I have discovered to my horror that I have a competitive streak. I think I’ll pick ones which just give away a cup of Tea at the end, that’s all I need to make me happy. I think I’ve got enough T-shirts now.

My nomination for April is the lovely positive thinking super chef Carrie Kemp!