Thank you to all those that attended. I’m sure you all join join me in congratulating Lucy Sheehan on her fabulous organisation of the Awards Night held on the 28th Feb 2015.

Mark Goodwin, the master of ceremonies, kindly introduced each category with the nominations. Richard Farnworth then awarded each winner with their engraved award.

The award categories, nominations and winners are listed here below.

Lady Runner of the Year

Male Runner of the Year

Club Member of the Year

As voted by the club members by blind vote: 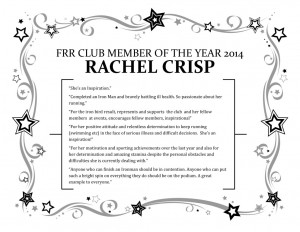 Congratulations to all the winners! See you all out there in 2015. Remember you can pay for your 2015 membership online now via the website.