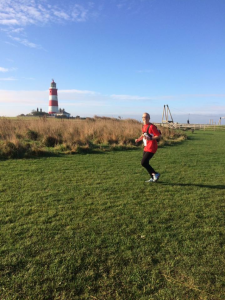 Every month I read these amazing profiles and admire at how witty and humorous they are. So when David nominated me (thanks David!) to produce something for July, I awaited an email from Peter asking for bullet points and photos that he would then put together to make me sound as witty and humorous as others. It is now only days away to the end of the month and a cold sweat has broken out as I realise that I actually need to write this myself….oh bugger!

We can skip all mention of my youth, biking to friends’ houses and playing Kirby was the extent of my physical activity.

Exercise began after Jennifer was born, I returned to work in 2008 when Jennifer was 9 months old and began working for the East Anglian Air Ambulance. My Manager, Nichola Whymark, was into her running and was always training for some race or would discuss the latest “long run Sunday” distance. She always seemed animated and enthusiastic about it but I thought she sounded bonkers!

There was an event with EAAA in Sainsbury’s one weekend where volunteers would be running a marathon on the treadmill in the foyer to raise money. A few days before a few dropped out of taking part and so Nichola asked me if I would mind taking part. How hard could it be to move on a treadmill – of course I would pitch in and help…….. 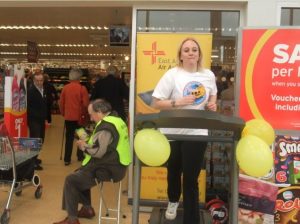 On the day I put on my old battered (non running) shoes and got on the treadmill, after 5/10 minutes I was feeling rather hot and also feeling the exposure of being in the lobby of a busy supermarket. An older Gentleman asked what we were doing and Nichola explain the event and that we were completing a marathon between us. The man replied “well you will never make it if she is doing most of the running” I remember feeling embarrassed but also that he was right, what was this dreadmill where I was running and not getting anywhere?  why did people do this for fun? And could someone please check the clock because it says I have only been running for 15 minutes yet it feels like an hour!

That stopped any ideas of me running again…for a while!

Fast forward a few years to my early 30’s and I was in a bit of a bad place. I had lost a close friend to cancer, it had started in her knee and originally they amputated, she kept telling me that when she got her prosthetic she would take up running and make the most of using her legs to get out there and do things and how she took getting up and walking for granted and felt she hadn’t made the most of what her legs could do for her. Sadly she never got the prosthetic and after being given 6 months to live, passed away after 6 weeks. That night, for whatever reason, I ran along the sea front – luckily it was raining so you couldn’t see that I was upset – but it felt amazing to be blown about and huffing and puffing and slowly the anger left and I realised I had actually enjoyed running along the sea front. 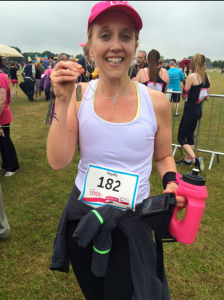 I signed up for the race for life, I ran in memory of Erin who had passed away but also for my ex manager (who was now my best friend) Nichola, who had also suffered breast cancer and was running in a pink wig. Being the character I am – I panicked about being last and not being able to run, so I trained a lot, it was one thing to plod along the sea front in the rain but another to actually complete 10K – with other people there to witness it!

I really enjoyed the run and felt that I did pretty well at it. So after that I signed up to the Rendlesham Run to remember, again, I kept going out in Kirton (avoiding all major roads to see as few people as possible!) and ran the 5K and enjoyed that aswell….at some point I must have decided that it would be a good idea to continue as I then signed up for Stowmarket, Bungay & Warwick half marathon’s all within a matter of weeks of each other!

I had been training for these half marathons by running out of the village and through Trimley, and every Sunday I would set off and at a certain point in my run, I would meet this runner coming in the opposite direction, as my distance increased it got to the point where I saw this runner every weekend and various points around the villages – That runner turned out to be Jon Glanfield, when he posted it on the Run For Your Life FB page I realised it wasn’t a mad man but someone else training for an event. He mentioned how being part of Felixstowe Road Runners had helped him and said what a great group they were to join. I was far too nervous to go alone, so dragged my friend Kate along with me.

The first session we attended was Amanda’s hill session, using bent hill and recovery through the gardens, I spent the whole time hoping that I didn’t embarrass myself by being sick on my first week! Even now, when I hear the sentence “partner up with people of similar running ability” a dread washes over me, every time I speak to people I get the “don’t worry I am taking it easy tonight” statement and then the session starts, by the end of it there is part of my lung and dignity left behind. On that note, I apologise if I don’t seem the friendliest or very chatty on Tuesdays, I am usually fighting for breath so conversation is only available for emergency use!! 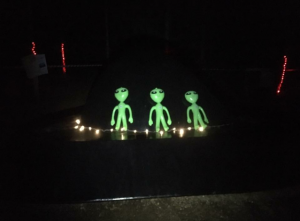 The group spirit has always been amazing though, I signed up to the Alien vs Trail Runners night time run, I hadn’t thought it through at all, the signposts were tiny red glow sticks in the trees, the whole forest was pitch black so while I was looking up for lights I also needed to look down for tree roots. However luckily Katrina knew that Ian Sillett was also running it and so she had asked him to look out for me. Ian was great and stayed with me the whole way round and made sure I was ok. Ian went on to run the daylight half the following day while I sat at home telling myself I really needed to read about these events before just entering them!

I have only completed 1 race with lots of supporters, which is Woodbridge 10k. I seem to choose the quiet, cheap & cheerful races to enter. Bungay Black Dog events are some of my favourites. After completing the half in 2016 and loving it I decided that it would be great to enter in 2017 to complete the full. Then the day came and it was a glorious heat wave (after months of training in the cold). I had an emotional breakdown at mile 21 questioning why I thought the hills would be a good idea to run twice! But then I saw my daughter cheering at the top of the hill along with my parents and the tears stopped, they knew the event didn’t have many supporters so they drove around the route to surprise me at various points.  The best part was getting an email from Mark Ford to say that I had played a (very small) part in being the third FRR female to cross the finish line meaning we won first female team – I was very proud of that. 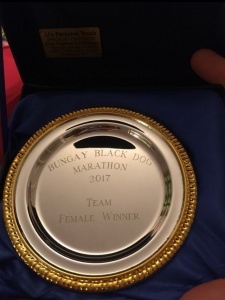 All of my other marathons have been trail, self-navigation and involve lots of food stops. The LDWA Flower of Suffolk & Daffodil Dawdle are amongst my favourite to run as part of a group. However my first ever marathon was also trail and was stupidly not entered as part of a group, this race was again powered by impulse (gin) and although my Dad kept trying to convince me that maybe I wasn’t ready for it yet, I was adamant I could do it. On the day the directions consisted of a map (er….) and a keep the sea to your left instructions (bloody hell!) after 15 miles and questioning where I was, I came across a couple completing the 100 marathon club, I begged them to let me run with them, using various tactics like how my only child was waiting at the finish line for me and would be worried as to where I was etc….it worked and they let me run with them, It took everything I had to keep up with them but they were very lovely about it and chatted away to me to distract me from the pain of getting those last miles in!

As Jennifer got older she began to question what I was up to and decided she also wanted running trainers, a deal was made and she tried out for the Junior FRR. This is now her third year running with them. After the first year I decided it was a bit silly to drop her off, wait around for her for 40 mins and then pick her up so I spoke to Amanda and completed the weekend Coaching Assistant course. Now every Wednesday, I meet up with Mark, Amanda & Dylan and I still leave part of my dignity behind as each junior over takes me along the sea front. 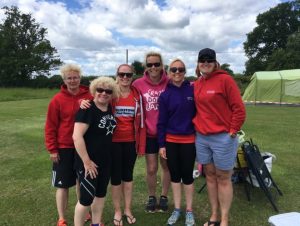 Taking up running and being part of FRR has made a huge change in my life, I look back at how things were when I stood on the dreadmill in Sainsbury’s to everything that has happened since and I am a different person. I have made some lovely friends and enjoyed 2 camping trips with them at Harwich 24. I met with Helen Duggan who has helped me with my nutrition and by the time you read this, I will have met with Bridget Read who is hopefully going to help my poor aching legs work properly again. It’s a full community of people with a common interest.

Hopefully the future holds lots more random cheap and bizarre races, I’m not concerned with finishing times, I am just enjoying the fact that I can run, that in my mind I can take Erin to all the places I run with me and do what she wanted to but couldn’t. Erin’s sister began running and started using the hashtag #useyourlegs to promote how much we take them for granted.

But, the next 45 days (& counting) are all focused on me, Jackie, Amanda, Jo & Bex getting around the SVP 50 (50km). My only time concerns are that I make it before the cut off that I don’t hold anyone up and that I don’t fall down a rabbit hole, but I am looking forward to the chance to laugh and gossip and have a lovely day out with fellow FRR members – and of course eat plenty of snacks as we go!

I have so many great race memories but each race story seems to begin with the same sentence…. “I had a few gin and tonics and then thought it would be a great idea to sign up to this race….” 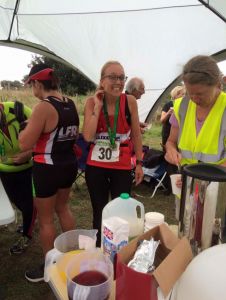