Hi everyone, blimey quite a surprise to read I was next on the ‘hit list’… I’m afraid I can’t come close to comparing with Josh performances, so I’ll take a more amusing/entertaining approach to my article !! I’d better give a quick introduction of myself being quite a ‘new boy’ to the club joining ‘second claim’ in September 2015 (first claim club being Long Eaton Running Club, LERC, near Nottingham)

I’m actually only a weekday Felixstowe ‘resident’ having arrived in Felixstowe in September 2015 for a 3 month placement to supervise a construction project on the Port and I’m still here nearly one year later (project not behind schedule, I was just happy to stay longer !!!)

Well, starting running goes back to my early school days (in home town of Peterborough) where I found myself being one of the ‘bigger’ kids who didn’t like sport whatsoever. At the time the Peterborough half marathon ran right past my parents house (and is still a very fast well organised Half Marathon held in October)– id watch it each year, and thought wow how cool it was that all those runners got cheered/clapped and looked like stars for the day – and thought ‘I wanted some of that action’!!

So, following year (aged 15) I entered thinking id just stroll up on race day and run – a friend of the family said you have to do something called ‘training’ and took me under his wing (buying first trainers for me – Brooks Chariot!!). Training was bloody hard work and I had no upper body strength, so I used to run with a stop watch round my neck holding the neck cord to support my arms!! But I was now running regularly, weight was falling off and I had the bug – I was now Tim the runner !!

I completed the Peterborough half marathon in 1hr 43min , joined the local club (Werrington Joggers, WJ) and just got carried along with the running boom of the 1980’s with running becoming a passion / obsession (with some cycling mixed in)!! At the time a new national running magazine called Today’s Runner was just being published by Emap and the editor / journalists all ran for WJ – so now I was a running with some running celebrities who worked on the magazine (Paul Larkins, Ian Thomson) and was chosen to test shoes and even appeared on front cover on a few issues (Reebok boy below!!)– wow, this was stardom!! Running (and cycling) has shaped my life meeting lovely new friends/ competing in events around the world and generally giving a jolly good feel good factor !!!….you nodded off yet?? 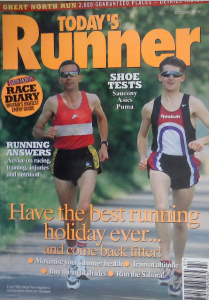 Where did all that brown hair go (and no middle age spread!!)??

Now let me apologise, at this point I may I deviate a little from running to triathlon as around 10 years ago I made that transition (as my running times were getting slower and injuries were now appearing!!) from mainly just running to triathlete(more heavily bike orientated)!! My favourite races aren’t necessary the PB ones (as they all occurred so long ago, I can hardly remember them!!!) but favourites for fun reasons:

When I look back over life so many happy life memories are attached to running, cycling or a combination of the two…without trying to bore you further, I packed my job in 1997 and backpacked around the world for 3 years, over this time running was the number one way to discover a new area, explore a new city streets, meet new friends etc …just a few favourite moments that spring to mind: jogging the streets in -20 degrees in Banff Canada (you could only breath through a scarf otherwise your tonsils froze !!), joining runners in Hawaii training along breath taking coastlines, running with the Bondi triathlon club and competing in a locals team in the Nepalese triathlon (I was the runner element, and got easily beaten by local kids living in the paddy fields who ran past me uphill) and running in Canadian woodland (not recommended) where I startled a bear who made chase (I kid you not!!). But I guess the single favourite moment was crossing finish line at Austria Ironman – time was 11hrs 1minute and if id not stopped for a neck massage in bike transition I’d gone sub 11hr (aarrghh)!!!!

This years ‘A race’ events have been triathlons up North, but the next big event is in September 2016 with the ‘3 Peaks Cyclocross’ (CX) cycle race/challenge race in Yorkshire. CX racing is basically a racing bike with knobbly tyres and were around way before the mountain bike were even invented in the early 1980’s!! The 3 peaks is a 45 mile off road bike race, 3 mountains to climb and only CX bikes are allowed (no mountain bikes allowed). It doesn’t sound so hard, but people from around the world try to enter this race which is labelled as worlds toughest CX event – only this day in the year do the farmers allow access across their land for the race. The hills are so steep you have to carry your bike up hill, and then the down hills so treacherous that you have to carry it down (so you carry your bike on your shoulder for miles – madness!!) …pictures below to give a flavour 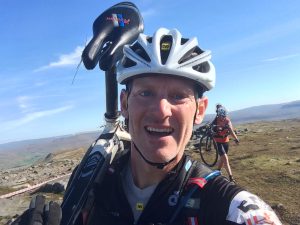 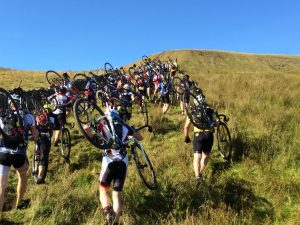 My placement in Felixstowe is fast approaching (end October 2016) and it will be very sad to leave, so my plan for 2017 is to find another project here and also start saving money for a Felixstowe retirement flat!! It will be very hard to put my red vest and kit to the back of the drawer, but I will wear it with true pride to train up North and remind me all the lovely people I have met in the club and all the fun times whilst I’ve been working down South!!