I’ve not even run 100meters since Woodbridge. I had planned to take in an easy Brandon parkrun on the 19th May as we were on a brief holiday at Center Parcs, however one of the booked activities clashed with my regular Saturday 5k, so had to forgo. Tuesday, I was committed to work events, so unable attend the usual FRR Training. Then Saturday 26th clashed with ComicCon which I’d promised to take my girls to, and so had to forgo the parkrun ritual there too. Tuesday again was trumped by work commitments in London… To add insult to injury, since meeting up with my family at Center Parcs, I’d also caught a level 3 cold from my youngest niece which was causing some sleep and general concentration issues. I tried to blow some cobwebs out by cruising a 14 mile cycle ride round north-west ipswich on Sunday. Everything felt good, but the sight of my running shoes made me feel nauseated. Short version: Someone stole my mojo!

Kirton 5 in 2014 was the first occasion I ran a race in FRR colours. I ran Woodbridge in 2014 as an FRR, but didn’t have the race vest. Kirton 5 was my first appearance in the formidable red and white vest. I remember fondly hacking up some of those hills with Hannah Tilson in my wake wondering would I ever learn to enjoy this. 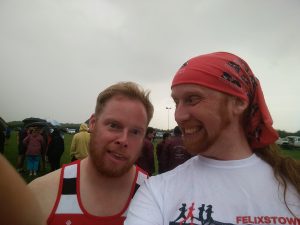 I lined up a lift from my brother Peter who’s a Bury Pacer. We’d also arranged to do a bus stop to pick up Rob Kemp (needs a nickname BTW) on our way through. Peter has always been more sporty than me, and has shown some good times at various races around the county. Peter is currently carrying some shoulder and a calf issue, and so was just looking for a positive race backed off from the usual aggressive pace he’d attack this distance with. But this was his first outing to Kirton, so was unsure about the “undulating” description. “Go out hard for the first mile I said”, remembering words Mark Ford had spoken on his Kirton 5 PB strategy. “And then pull back a bit for the remainder.” Rob, like Peter, has run the distance before at Brantham, but never at Kirton. He was aiming for a 52-ish finish, which compares I think to his Brantham 5 time in 2016.

As we drove closer, the rain that had been forecast began to break. And by the time we’d parked up it was tipping down. Large puddles had formed even on the event HQ grounds, and as I headed out for a very short warm up with Rob we dodged through several large puddles and what could be geographically classified as lakes! I incorporated some sprint-pauses into the routine. Everything felt good. This was on. Given the general state I was in, I felt it only proper to introduce myself to the medical team on site. I explained very breifly by condition, and they jotted down my bib number. Now to get on with this race! 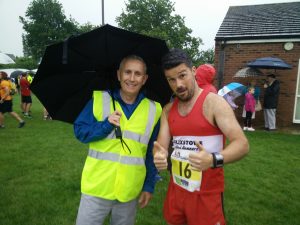 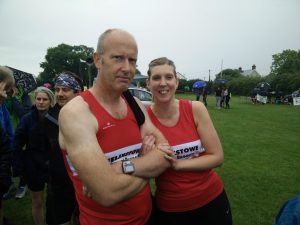 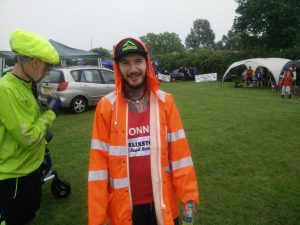 The Juniors had gone out now, but were taking a little longer than expected to come back in before the race proper was underway. Early indications were that the peloton took an erroneous course diversion leading to a total of 5k covered by the littl ‘uns. It’s an easy mistake to make. This upset in the Junior fun run meant for safety reasons the start of the main event needed to be pushed back by a few minutes. This wasn’t a problem, as the rain was now beginning to ease, and was now barely drizzling.

I’d picked a far left position about 3/4 of the way back to jostle for. I knew this was going to be tough as with all the rain, the general humidity was making breathing through my cold quite difficult. I was however in good spirits. As the fog horn sounded, I charged forward at a fairly aggressive pace. Lots of other competitors were slowing to move out of the way of the puddles. I knew the truth though: There were going to be plenty more puddles ahead… and they are all made of water. This made my attitude of charging straight through them all the more satisfying!

After the first mile I’d made some good progress, however I needed to pause to remedy a costume failure. My laces had come undone on my left shoe. I picked the race back up and was to-ing and fro-ing with a number of FRR’s, until I settled into a steady pace for mile 3. (No chest pain btw). As I cruised mile 3 I could see John Driver just a few 10’s of meters ahead. Damn I wanted to catch him, I applied a little pressure, but every time I did my heart alarm would kick in meaning I was over-exerting myself, and so needed to pull my pace back a bit, just to be safe. I could also feel my core tightening just below my belly-button. Was this the result of not having done any regular exercise for over 2 weeks? It was uncomfortable, but bearable and eased off after a half mile or so. This was going to be simply a case of trying to manage my effort effectively to draw in the distance between myself and John but remain in a safe region for my heart. My breathing was now getting quite raspy, and was having to cough and sneeze every so often. John was pulling away.

I clocked through mile 4 and was growing somewhat frustrated with the internal battle I was having between my speed and my heart rate. I played it safe, but this meant watching John slowly put more meters between us. Sweeping into mile 5 I could hear the public address system in the distance and Scott MacSephney heading in the opposite direction. “You’re going the wrong way, you loon!”, I teased. “I’m going back to run Nikki in” Bless. As I turned into Back Road, I could see John was clearly a distance away that I could not close, but I could reduce. As we peeked round that final bend into the finish straight I could hear the supporting spectators roaring us in. “Come on JJ! Sprint!”. I could see the race timer ticking 47:50, 47:51,… could I get it in under 48:00? I pushed a little harder and held on to the lead within the pack that had formed in the last 100 meters. Official time 48:00. My 2014 time was circa 53:32, so was a PB! Boom! My legs had more in them, but in the generally poor condition I was in for running, I was happy with the result. My brother Peter snagged a 39:52 time, and Rob picked up a very assertive sub 48:49 time, and was basically on my heels for the last 2 miles without me knowing it. Kudos, friend! 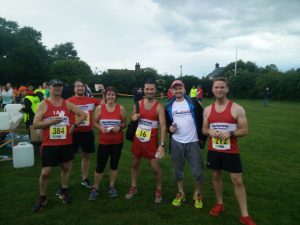 As I worked my way around to get my shoe tag snipped, I felt an arm go around me. “Are you ok Mr Jenkyn?”. It was one of the paramedics. “I just want to make sure you’re ok. Do you want to do a short warm down jog to level your heart rate out?” Wow! No medical team at a race has ever given me that sort of one on one care. I was touched. “That’s what we’re here for”, said the paramedic after I thanked him for his concern, and reassured him that I was fine. 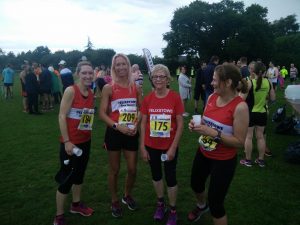 What a fabulous race FRR put on here in Kirton! All credit to Vince Calver and all the marshals and support crew who made this yet another resounding success for the team.

I’m dedicating this race to a friend of mine who is currently in Addenbrooke’s Hospital losing his short battle with cancer. Sleep well Theo.