How I got Into Running (or “Dave’s Life in Running”) 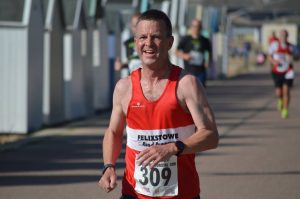 School (1970s) I hated running at school. I skived off anything to do with sport, but I was still ensnared into the occasional “games lesson”. When it was too cold and wet for us to stand about on the school football field we had to traipse over to the local park for the dreaded cross-country run.  Us delicate types started with the others but then diverted to a large oak tree which we hid behind for 30 minutes. When the others returned we jumped out just for the last quarter of a mile, having applied a bit of mud to our legs to make it look as though we’d been trying.

Army (1980s) Like Shaun Good I am no stranger to the military life. Aged 22 I joined the Army Reserves as a bandsmen (I still play clarinet). This was mainly spent getting drunk (tax-payer’s expense) at officer’s mess dinners and other ceremonial functions that required us to provide “music”.  However once a year we had to do the Army’s dreaded Basic Fitness Test (BFT) and even fire a gun (eek!) Us youngsters in their 20’s were actually made to do it properly – this included running 1.5 miles supposedly in around 10 minutes! I remember doing the first one in the grounds of Windsor Castle, under royal supervision. Of course I couldn’t do it then or now but surprisingly found I almost enjoyed the challenge.

Getting Fat (1990s) In 1992 we moved from London to Shrewsbury and I settled into a sedentary existence at work in front of a computer screen. I had 4 children and a ghastly call centre to run and that kept me in shape for a while, but the real killer came when I was 40 and I started virtually doing a virtual job, working from home (virtually). I’d been putting on about a pound a year up to then anyway but now found myself looking distinctly “chubby.” At the end of the millennium I crossed the 12 stone threshold (I used to be 10) and I decided “something must be done”. I started intermittent “jogging” as my new millennium’s resolution.

Getting Fit (early 00s) – My First Race  Jogging 3 miles on a Sunday afternoon did at least keep things under control. I ran entirely on my own and wouldn’t dream of joining a club, but around 2003 something (devine providence?) inspired me to try the local town race – this was the “Shrewsbury Seven Bridges Race” which looped backwards and forwards across the River Severn, but using the bridges. I knew so little then about running that I actually thought I’d entered a fun run, but looking it up now see that it’s actually a proper 10K race. I wish I knew what my time was (I think under an hour) but I remember being pretty pleased with myself and deciding maybe I was actually OK at it running!

Netherlands (2004-2014) I can’t do hills and this explains why. In 2004 we moved to Holland and stayed for 10 years.  We lived near a beautiful lake which I ran around about once a week. This was really still more about weight control than anything else but my speed and fitness did gradually improve over time. Smartphones arrived in 2008 and I got into running apps, keeping records and actually trying to improve. Eventually I did the annual 10K race in the Hague three years running and turned in some OK times for my age  – around 50 minutes. 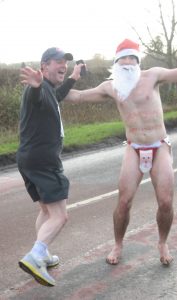 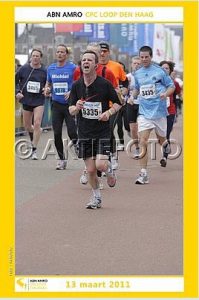 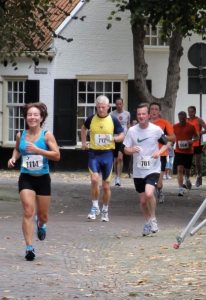 Tri-ing times My brother-in-law, who had been doing a charity “London to Paris” triathlon for 20 years finally persuaded me to enter one of these with him, and I did four from 2011 to 2014. It was quite a challenge for me as I hate swimming and only do breast stroke, so a 1Km swim in the murk of the Hyde Park Serpentine terrified me. With good reason, as the first year I was so long in the water that I was hypothermic at the end (despite a wet suit) and my “transition “consisted of being wrapped in silver foil for 25 minutes before finally being allowed to set out for the 10K running leg.  In all honesty, as triathlons go it was all a bit of a joke as we then nipped onto a Eurostar to the Paris Euro-Disney hotel before doing the cycle leg next morning! (some transition skills eh, Adrian Hine?).

Felixstowe (2014).  We moved back to the UK in 2014 and as I (sometimes) work for BT at Adastral Park Felixstowe seemed like a nice place to live. The problem was I knew absolutely no one in the town. What to do about this – maybe join a club of some sort, perhaps philately (calm down, its stamp collecting) or maybe the crochet club? Walking the dog on the prom that summer I encountered the FRR cohort on a couple of Tuesday evenings and what a happy, lively bunch they seemed. Only four months later I plucked up courage and (taking my daughter along for moral support) turned up at Brackenbury for a Jonathon Wilding hill-session. Jon took an immediate liking to my calves (“sexy legs”) but repeatly running up and down Bent Hill after 10 years on the flat in Holland resulted in my precious calves being completely ruined and I literally couldn’t walk for 6 days. But I had joined the Felixstowe Road Runners and started to take running seriously – I bought a Garmin and some new socks. 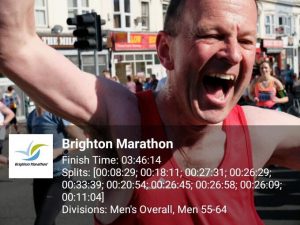 I have packed in so many races into the last 3 years. I think my first marathon attempt at Brighton in March 2016 was my favourite. A lot of work went into the training with many Sunday morning long runs that Spring with great people I had met in the club like Erika Downs, Paul Schwer, Lucy Sheehan and Sarah Parker. But I also met Jon Glanfield, who was also training for Brighton (and who of course we did eventually persuade to join FRR). Lots of advice was taken and much research done. I did have a couple of injuries in the run up to it, but naturally the marvellous John Reynolds sorted those out. I was still very nervous about being able to complete 26.2 miles, as awful cramp always seemed to set in around mile 18 when training.

However, on the day everything just seemed to come good.  I stuffed myself at a rate of one “treat” per mile with an evil concoction of Hi5 gels, SIS gels, salt tablets, paracetamol, jelly babies and any other junk I could hoover up along the way. Taking Paul Schwer’s advice I forced myself to run the first 18 miles so much slower than I wanted (maybe he was just trying to nobble me?). When I arrived at the power station turnaround I found a horrible industrial wasteland full of groaning cramp-ridden athletes and portable toilets, but such was my sugar high by then that I really let it all go – and with the wind behind me I almost sprinted the last five miles back along the prom to home. This was to be my one and only “negative split” in a race to date and boy did it feel good to be passing all those other runners as I headed for the finish (including the suitably dejected Paul Osborne and Shaun Good, both of whom have since got their revenge on me big-time).

I think my other favourite race was also in 2016 and that was my one and only ultra (all 100Km of it) the Stour Valley Path. I’m not sure whether it was through bravery or extreme stupidity but I entered this less than three weeks before race day, having been goaded into it by Mark Goodwin. As a result minimal training and research was done.  I only just managed to purchase a hydration vest in time let alone learn how to use it, but I somehow got away with it! I was running with a fantastic gang of FRRs including Mark Goodwin, Erika Downs, Adrian Goode and Jimmy Russell and we all just kept each other going. That, together with support from all the fantastic checkpoint crews including the two brilliant FRR ones headed up by Jo Whelan and Jayne Burman. It was touch and go whether we were going to finish before the cut-off, as we managed to get lost several times and I knew that once darkness fell we’d be in big trouble if we got lost again. What a relief for me, Adrian and Erika to make it to the end with only 20 minutes to spare after more than 15 hours of running! 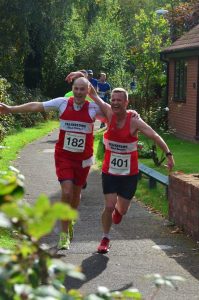 I’ve had a fantastic few years, thanks to FRR.  In 2015-16 I worked my way for the first time through most of the local Suffolk races, the parkruns, two marathons (Brighton and  Leiden)  and an Ultra (the SVP).  I picked up three Suffolk Age Category awards in 2016 and of course that ultimate accolade, Harper’s 1000 miles.  I even started eating better and doing some core exercises. No longer did I have a floppy core, now I was a real hard-core runner.  So my next challenge has been to have a shot at qualifying for the Boston marathon.  I selected the fastest, flattest course I could find and on the day (in Budapest, October 2016) the conditions were perfect. I got a PB of 3 hours 36 mins, well inside my qualifying time (3 hours 40 for old gits like me) – but of course you still need to be amongst the fastest qualified entrants for your age category. So I spent a nerve racking 11 months waiting, then this September heard the news (from Gail Mackie) that we’d both qualified for 2018!

In all honestly since Budapest I’ve taken my foot of the running pedal, there’ve been other life distractions for me in 2017. I got injured in the spring and had to DNS Brighton. I’ve mucked up quite a few races, most notably Dublin last month, which I trained for by trekking seven miles up a small mountain the day before, wearing only a pair of plimsolls, with predictably hilarious results.

So my challenge now is to arrive in Boston next April in the best possible shape and not to **** it up, as this will probably be my only crack at doing it. Oh, and there are a couple of other great challenges for 2018. Hopefully a 5 Km PB in the new Felixstowe parkrun, courtesy of the amazing Sarah Fitch. Then one I’ve somehow missed out on totally called blockrun™ courtesy of the amazing Jon Glanfield. What the hell is it?

We have a gender imbalance in the runner profiles so far, to address this the next up is – Speedy Sarah Severwright.